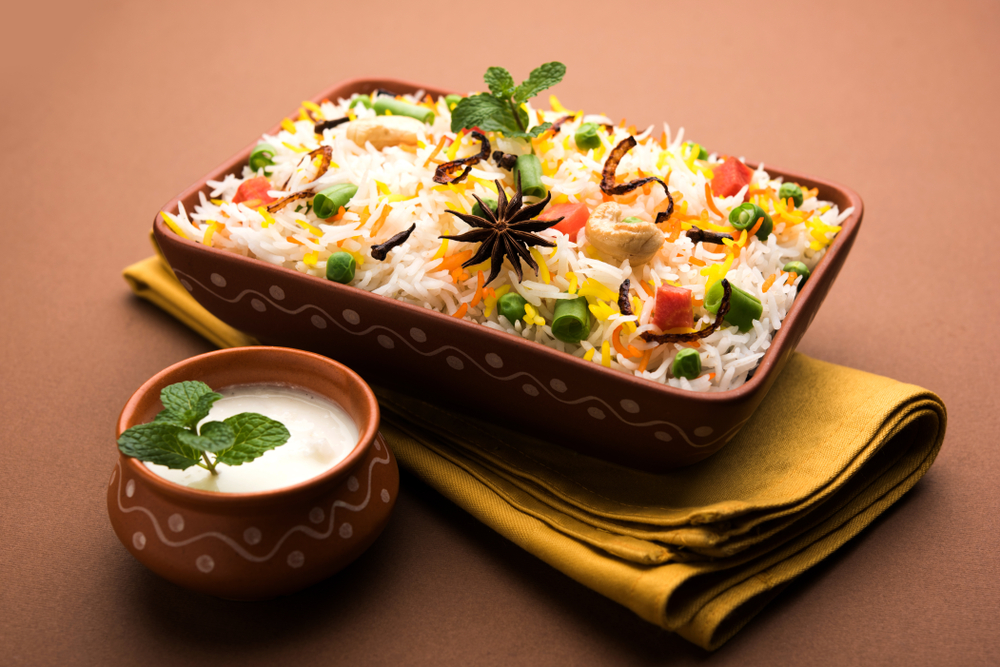 “I just want one single bite of biryani”, said no person ever…

Flavoursome and succulent, infused with the most aromatic local spices, Biryani is a complete meal in itself and a hearty one too. Whether it is the celebratory cheer of a lavish Sunday family lunch, or a simple road-side indulgence during the mid-month pocket-crunch, biryani is soul food at its best.

These 10 vastly different kinds of biryani are bound to leave you spellbound by the sheer combinations that are rendered possible by primarily combining rice and protein, and the lip-smacking results that are achieved…

While the Northern States of India first tasted this wonder from the Mughal exposure, the Southern states saw the biryani light through the taste buds of the invading Arabs. Due to the extensive stretch of the Indian continent and the diversity of culture that flourishes in this land, a wide array of variations to biryani were conceived, be it in terms of the meat used, the principal spice used to flavour or simply the cooking style. Hyderabad itself has over 40 preparations of biryani, almost giving it the status of a full-fledged cuisine.

The preparation of biryani is essentially done with the meat and rice being semi-cooked separately and then mixed together during the final stage to ensure a delectable amalgamation. However, different approaches are prevalent as well, and usually region specific.

This dish spells regal in every morsel, and unsurprisingly so, for it was first curated in the royal kitchens of the Mughals. It is extremely popular in Delhi and is generous in its portions of mutton, cashew, saffron, silvered almonds and other exotic spices.

This biryani preparation finds its roots of origin in the traditional Persian style of cooking- a method referred to as dum phukt. The meat is infused with spices and allowed to cook separately from the saffron and cinnamon rice, and then they are layered together in a deep bottomed earthen pot which is sealed. The dish is kept to cook for hours till the flavours penetrate deeply, resulting in the mild dish that is rich on the palate.

As a major part of North India is inhabited with vegetarian communities, the locals experimented with authentic biryani recipes and successfully arrived at delicious vegetarian versions. This vegetable biryani was colloquially referred to as “tehri”, which is now a popular street-food option in Kashmir. In this recipe, potatoes and carrots were used instead of meat. This preparation is high on the spice quotient.

In Eastern India, biryani is extremely popular in Bengal. Although the dish was brought to this part of the country by the Nawab Wajid Ali Shah’s chefs when he was exiled from Awadh, Bengal biryani has its own signature taste and aroma. Mild spices, ghee and yoghurt-based meat are combined with light-yellow rice and seasoned with saffron, rose water, nutmeg and kewra to give the dish a unique flavour like no other. Potatoes and eggs are additionally added which further lends the biryani an unmatchable authenticity.

Derived from the Irani style of preparation, Bombay biryani, usually served with a side of rich meaty gravy, assimilates the best from a plethora of variations, adds a special stroke or two of its own, and serves a magnificent delicacy laden with tanginess and spice. Be it the presence of fried, spicy potatoes like the Calcutta biryani, or using the dum method of Lucknow, or having the same base as the Mangalorean-Gujarati bhatkali biryani, Bombay biryani is inspired from the best tweaks of every region. However, it is one of the rare, sweeter biryanis that is prepared in oil instead of ghee. It is topped with fried onions, dry plums and screw pine water, the latter two being the source of its distinctive sweet but tangy flavour.

This variety of biryani is supposed to be extremely spicy. It formulates an integral part of the local cuisine and bears a strong resemblance to its Sindhi counterpart. However, the Memoni preparation uses fewer tomatoes in the dish, and there is negligible presence of food colouring in comparison to the other styles. This dish relies on deriving colour and flavour from real elements in the dish, such as spices, vegetables and tender meat.

One of the most popular dishes in entire South India, Hyderabadi biryani focusses more on flavouring the rice rather than the meat. With over 40 different variations available in one city alone, this dish dominates every occasion, every season. What really sets the Hyderabadi biryani apart is the presence of coconut in it. One can broadly classify this region’s staple food into three further segments- Kalyani, Kachchi and Pakki.

Commonly referred to as the poor man’s biryani, the kalyani variation uses small cubes of buffalo meat as opposed to full pieces, which is mixed with different spices, coriander and tomatoes.

The Pakki version requires the basmati rice and the meat to be cooking separately. Once fully prepared, they are combined by being alternated in layers and left on flame for the flavours to be allowed to blend properly.

Kachchi biryani, on the other hand, is a preparation where the uncooked, marinated chicken is multiply layered with rice in an earthen pot. The handi is sealed with wheat dough and the steam trapped inside cooks the dish. The seal is opened only at the time of serving.

Prepared using a very unique variety of rice- the small, thin-grained khyma, the Malabar biryani is extensively eaten in the state of Kerala. The other unique factions of this rice lie in the way it is cooked, where the gravy and rice are prepared separately and the sealed top of the biryani rice is covered with hot charcoal. Another special feature of this biryani is the generous amounts of cashews and raisins that are present, along with local Malabar spices, fennel seeds and fried onions.

Two dominant varieties of biryani prevail in the Land of Idli-Sambar: Ambur and Dindigul. Also known as Vaniyambadi biryani, the Ambur variety essentially offers chicken, mutton, beef and prawn options as the meat component, tinged with mint and coriander for a unique flavour. The meat is soaked in curd before being mixed with rice, thereby adding a flavourful dimension to the dish.

The Dindigul biryani is loved across Chennai. They use the jeera samba rice as the base, and the flavour is highly peppery and tangy, which can be associated with the presence of meat chunks, lemon, curd and whole black pepper.

Karnataka too offers a lot of biryani options, but two especially noticeable ones are the Bhatkali and the Beary varieties.

The Beary biryani is one of the mildest biryanis, hailing from South Karnataka. Its spicier alternatives are available in Mangalore. The rice is mixed with ghee and kept overnight, allowing the flavour to truly seep into the grains.

The Bhatkali kind has drawn its inspiration from the Middle-East, the meat is marinated in a green chilli and onion masala mixture and cooked in curd. The cooked biryani is seasoned with crushed garlic, semi-mashed onions and curry leaves. No oil or ghee is used during its cooking, making the biryani comparatively lighter on the stomach.

No matter which part it comes from, biryani remains one of the all time favourite dishes of the country.

0 comments on “Biryanis across India: Bringing the local culture to your plate”