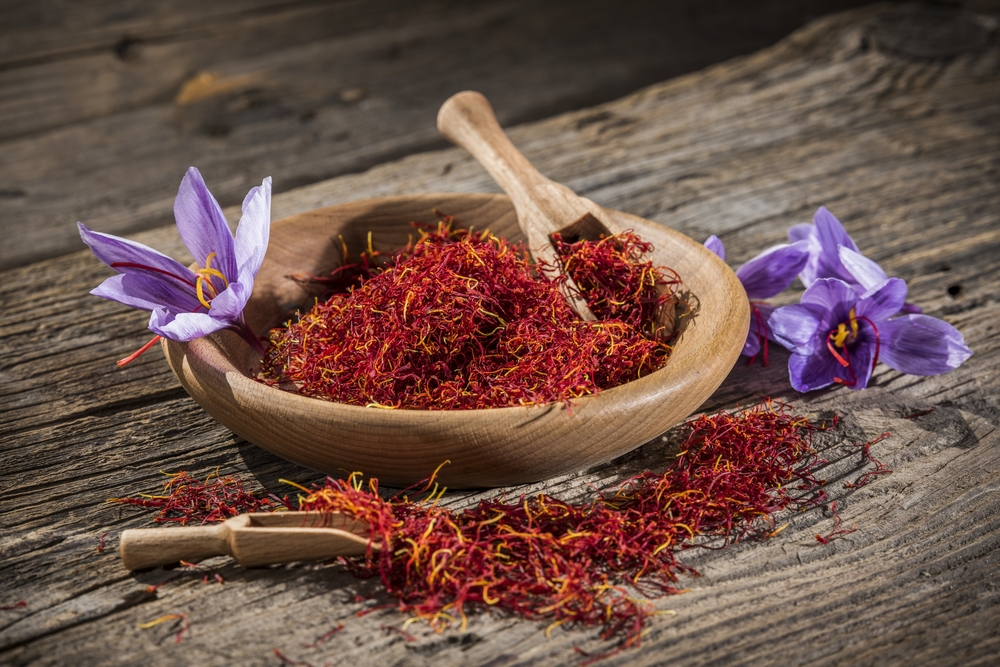 Considered the most expensive spice in the world, Saffron or kesar is intrinsic to many cuisines in the world. The deep yellow colour and intoxicating aroma affirms its exclusive top ranking on the list of the most revered spices in the world.

Used widely mainly in Kashmiri cuisine and as a garnish, it is documented that saffron or kesar was actually a daily part of Persian life thousands of years ago. Yet other theory says that the ancient Greeks used it in temples and also in their perfumes. But saffron has a widespread functionality as it was used to dye clothes of Buddhist monks and royalties too and remained an important component in cultural rituals.

It is believed that the legendary beauty, Cleopatra used saffron in her face mask. Cultivating saffron is easy but it is expensive because it is labour-intensive. Famous as an aphrodisiac, it is used to treat infertility and impotency.

Spain, India (HP, J&K, parts of Karnataka) and Iran are the leading producers of saffron. Growing of this spice is simple as it can be grown anywhere.

Saffron is harvested from the blossoms of Crocus sativus (Iridaceae,) commonly known as saffron crocus or saffron bulbs. A saffron flower has three red-coloured branches or stigmas which is used for culinary purposes. Growing up to 20cm in height, Crocus sativus is a spherical plant which is perennial with autumn-flowering bulbous corms varying in colour. They go from lilac to purple. Corms are bulb-like plants that sprout underground. It looks swollen, much like an onion and facilitates storing.

It is the corm that is utilised for the cultivation of this spice. They are collected for their red stigmas or saffron threads which gives us this royal spice. Each blossom gives three stigmas. They have to be carefully plucked by hand, all before afternoon as they wilt quickly and easily. This process is tiresome and the farmers have to be extremely thorough.

Saffron grows in sandy, loamy well-drained moist soil. It requires good sunlight but the temperature needs to be very low. August to September is the best season for planting and October is for harvesting. Once harvested, they are dried for less than a week after which they are kept in air-tight containers.

The ideal pH is between 5 to 8

Besides the leading cultivators, Saffron crocus is also grown in Afghanistan, Italy, Greece, France, New Zealand, Portugal, Morocco, Turkey and China. Since this plant is raised in different parts of the world, planting techniques could differ from country to country depending on the soil, climate and such other farming conditions.

Saffron or kesar is valued for more than just its ranking in the culinary domain. Its value extends to health and wellness and could boost your mood if feeling low. Simply taking in its aroma would also do wonders to your mental state. Interestingly, it is also famous as a sex stimulant. Besides these exciting functions, it also improves memory.

It has now been discovered that saffron is an active anti-cancerous (anti-mutagenic,) immunity booster, anti-depressant and antioxidant spice which reduces heart ailments. These anti-oxidants are seen to improve cognition in seniors suffering from Alzheimer’s.

It is also known to help with indigestion and gastro-intestinal issues and high blood pressure.

Both, consuming and smelling saffron appears to help treat PMS symptoms or related issues such as irritability, headaches, cravings, pain, and anxiety.

Saffron is known to bring down the urge to snack, thereby curbing your appetite. Now royal help is at hand for all those seeking to lose weight. It also reduces blood sugar levels and improves eyesight.

One teaspoon of kesar contains:

A Twist in your dish

To give your dish a grandiose flavour and deep yellow-red hue, take your pick of the best kesar. Here in India, we get three types of saffron – saffron mongra, saffron lachha and saffron zarda from which saffron lachha and mongra are difficult to acquire.

Tasting earthy and musky with a delicate honey type fragrance, this incredible spice is used often in Kashmiri cuisine. It lends itself to European, Mediterranean, Asian and many other exquisite cuisines across the world.

From Kahwa to Spanish paella, Swedish buns to Italian Risotto, Biryani to Frenchman’s Bouillabaisse and Greek Saffron Pilaf, saffron is revered in the recipes.

0 comments on “Saffron – The Golden Spice ”