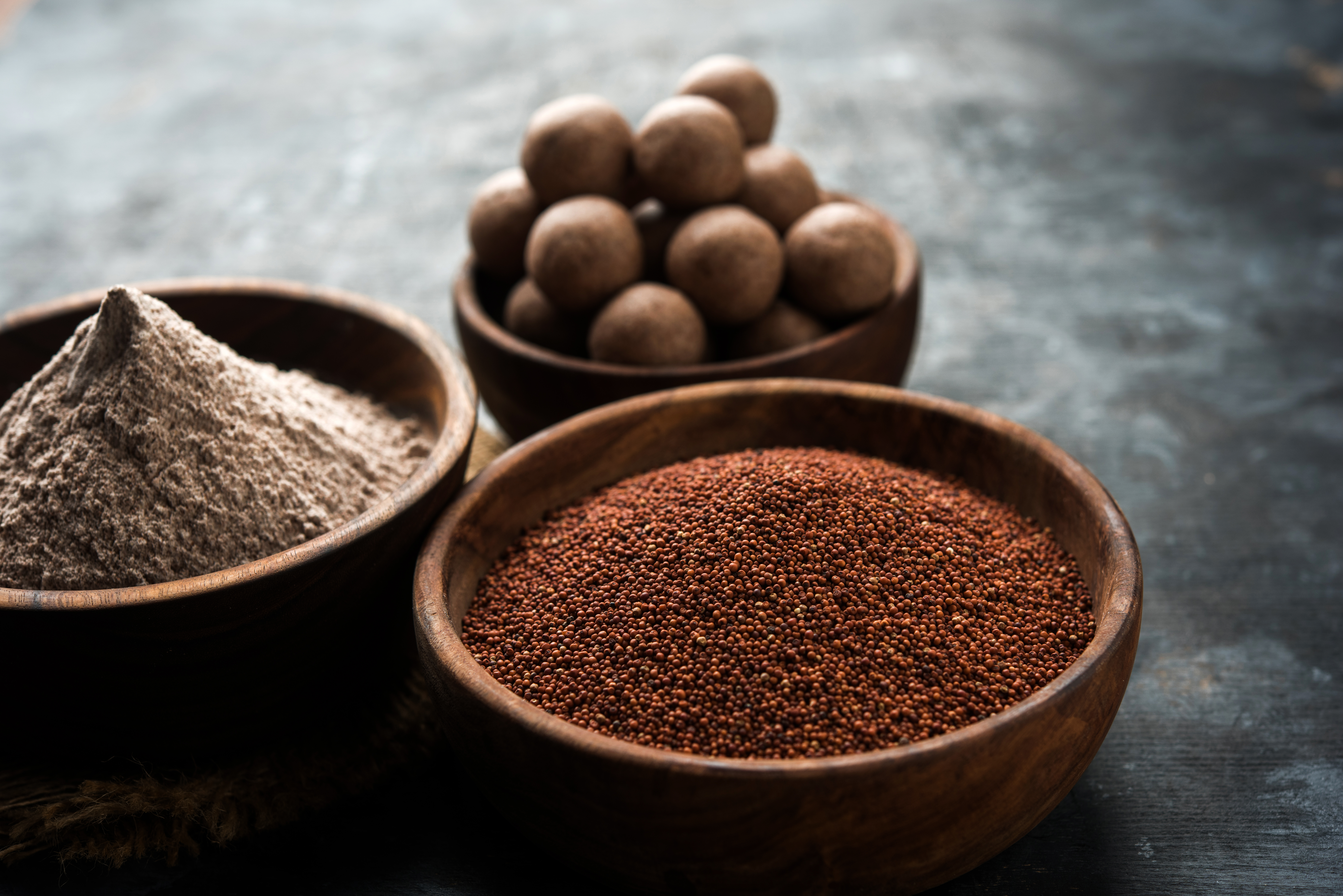 Ragi, also known as finger millet or nachne is widely grown in India. It’s spoken about highly for its health benefits, easy availability and affordability. This wonder is round in shape and dark coloured, differing from reddish brown to brown. Being gluten-free and high in Vitamin D, it is a favoured choice among many. More on what makes this staple food so special…

Ragi is a cereal crop commonly found in South and other parts of India.  A native to highlands of Uganda and Ethiopia, this super rich millet is the main part of a farmer’s diet as it is nutritious and can be stored for a long time.

Once harvested, the seeds are not generally infested and once unthreaded, it can be kept for 10 years or more. All these qualities make this a significantly low-risk crop for farmers.  Whole grain flour is the main end product of this nourishing millet. However, this diminishes the storage duration due to the high oil content.

Ragi is known to be the deity’s food. Koozh, a porridge, is offered to Goddess Kali during pooja. This millet is especially recommended for those who are recuperating, as it extremely healthy and fulfilling.  Shibani Talpade, consulting dietitian suggests ragi/ nachne for pregnant women and mothers who are lactating, as it is very nourishing. In Kumaon, it is traditionally given to women after delivery.

She further informs, “Ragi is easily digestible, making it ideal for infants above 4 months.” Giving them porridge made from it along with mother’s milk helps during the weaning phase and shifts them to solids. These features make the food apt for infants, elderly and vegetarians.

The ragi crop has a high heat-tolerance and soil salinity.  Therefore, it is commonly grown in the parched and semi-parched regions. It also grows well in cool places and can be cultivated at higher altitudes such as the Himalayan region.  However, a good drainage system is required as ragi has just a moderate capacity of holding water.  Finger millet farming is done mainly in two phases of harvesting.

It is difficult to mill ragi as it is small in size and can get crushed during the process. Moreover, the bran is tightly covered to the endosperm, making this procedure fragile.

The malting phase is common in the production of brewed drinks such as whiskey and beer. Finger millet lends itself well to the malting process, as the seeds trigger enzymes when germinated.

Did you know that ragi is therapeutic, especially used to treat colds and sinus?  Shibani Talpade adds, “This wonder millet is good for weight loss, diabetics and lowering cholesterol and it works equally well in cases of IBS and eases arthritis.” Powered, it is ideal for those who suffer from low hemoglobin levels. As with all millets, ragi is alkaline in nature.

Tejashre Bobde of Minerva Essence says, “Finger millet contains a high amount of calcium and protein.” It has a well-balanced essential amino acids composition along with vitamin A, vitamin B and phosphorous. The high fiber content checks constipation, high blood cholesterol and prevents intestinal cancer. A complex carbohydrate, this millet is high in micronutrients mainly iron, essential amino acids and methionine.  It is also extremely nutritious for the sustenance of those who live humbly, as it gives more energy than other cereals.

Finger millet can be powdered and used in kanji, cakes, and porridge. The grain is also used to make flavoured drinks at festivals and even fermented to make beer.  The straw of finger millet crop can be used as animal fodder.

Finger millet merits a mention in the diet of royalties. Here are a few recipes from different parts of India and other countries made out of it.