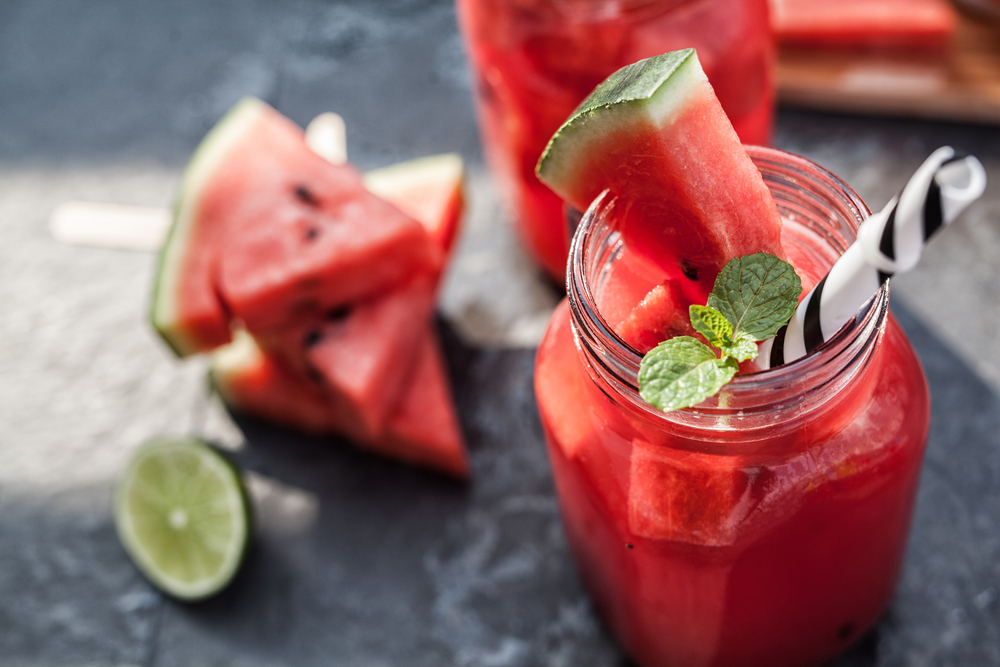 Refreshing, rejuvenating…well there is no summer without watermelon juice!

Watermelon has a juicy, sweet flesh with a delightful crunch to it; suitably sweet the fruit is 6% sugar and more than 90% water. Enjoy a plate-full of this healthy melon to restore your energy which makes your palate happy too. The fruit can be eaten raw or pickled. Its rind is packed with nutrients and it is edible after cooking. It can be used as a vegetable. In the southern part of the U.S., the rind of the watermelon is pickled.

Wine is made out of watermelon too. It is also used in fruit salads and squashes to add to its yummy flavour. It is enjoyed as a summer juice or can also be found as an ingredient in some mixed beverages.

This wonderful, tropical fruit is originally from South Africa belonging to the Cucurbitaceae family. Its history can be traced to ancient Egypt where seeds of melons were found in Pharaoh tombs.

The watermelon plant flowers like a scrambling vine and is cultivated worldwide. There are more than 1000 varieties of this fruit.

Cultivated in favourable climes from tropical to temperate regions, this large fruit is a berry with a hard rind. Botanically called a pepo, the juicy flesh colours range from deep red to pink, encrusted with black seeds. A seedless variety is also available.

Watermelon as an ancient fruit, was then known as “Tsamma Melon.” It is still available in the Kalahari Desert. Watermelon is a huge fruit weighing between 11 to 44 pounds.

It is a vine-flowering plant and referred to as “Pepo” as the botanists consider it a berry. It has a thick outside rind – the exocarp, while the fleshy inside part is called mesocarp and endocarp. Though the flesh is generally pink, it can also be orange, yellow, red and if not ripe, then green. A great source of vitamin C, the skin is green, which turns yellow when it ripens.

There are mainly four varieties of watermelon-

The European Cantaloupe – this variety is consumed the most; The Honeydew, Korean Melon, and the Tiger Melon are the other varieties of watermelons.

Many efforts have gone into cultivating disease-resistant varieties of melon. Many fertilizers are available that produce mature fruit within 100 days of planting.

As it is a large fruit watermelon needs a lot of space when it is blossoming. One vine of watermelon can stretch to several feet. Once it is a full-fledged fruit, it settles on the ground and begins to grow there.

The seeds should be sown in November-December. Watermelon requires a moderately warm temperature in fertile, sandy loam that is rich in organic manure. There has to be good drainage. Its pH should range from 6.5 to 7.

Every hectare of an agri-farm would need 3.5kg of seeds. The field should be ploughed to a fine tilth. Long channels should be formed with a space of 2.5m from each other. Crop rotation yields better fruits.

As this melon is a “summer fruit” the seeds are sown in January-February and harvested in the summer months. This yields a bounty that brings in the best price. The field should be irrigated every 15 days before holes are made for the seeds, after that once a week.

For its irrigation, drip system should be fixed. Beds should be 1.2m wide and 30cm high so that sowing is done well.

Full of healthy goodness, watermelon takes you by surprise. Its high water content keeps you hydrated, and its fibre makes you feel full. No wonder then that it helps in weight reduction. It is fat-free, contains only 46 calories per cup and aids digestion.

It contains a lot of vitamin C and has many antioxidant properties. It is good for the heart, skin and hair.

Every juicy crunch has healthy amounts of vitamins B6, A, and C. A melon also contains lycopene, antioxidants and amino acids with some amount of potassium. The potassium and magnesium content makes the melon rich in carotenoids. Lycopene reduces oxidative damage, reduces cholesterol and thickness of artery walls and lowers blood pressure.

It has great benefits for brain health, delaying the onset of Alzheimer’s and age-related macular degeneration.

It contains an important amino acid, citrulline, which reduces muscle soreness. Further, watermelon juice increases the absorption of citrulline and so improves exercise performance. Watermelon is a versatile fruit good for health and wellbeing.

Enjoy watermelon as a hot-summer snack as it consists of 92% water with almost nil protein or fat. It is low in calories.

The nutrients in 100 grams of watermelon:

0 comments on “Watermelon – A versatile fruit for health and wellbeing”