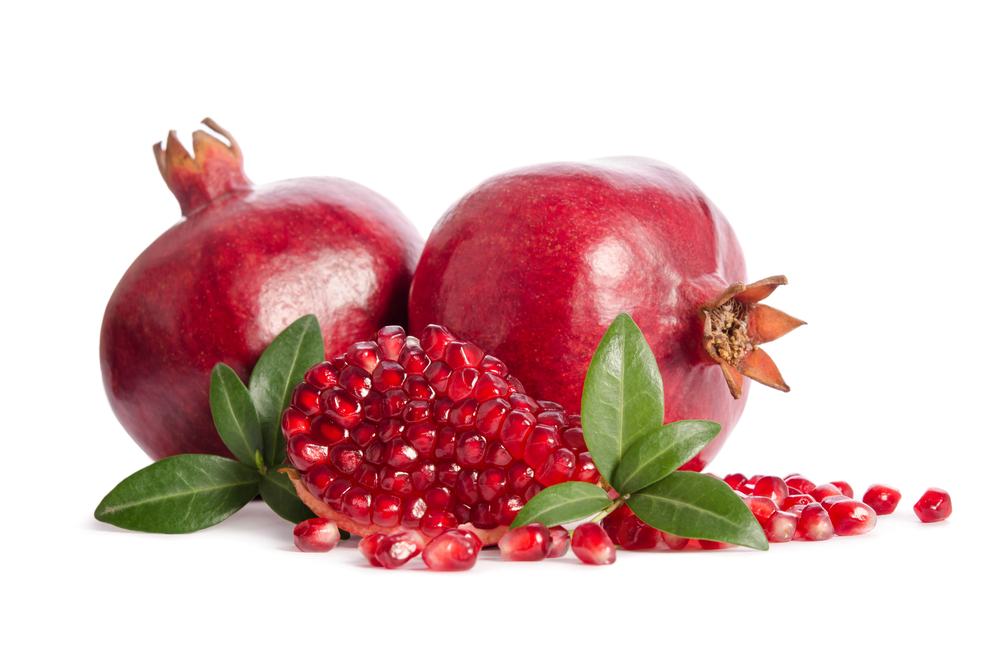 In a league of its own, pomegranate is a fruit that can boast of its glorious history. Called Punica granatum in the botanical world, it is actually a shrub which bears red fruit. It hails from the family, Lythraceae and subfamily, Punicoideae and is an ancient fruit that is indigenous to Iran.

It is visually striking with a reddish, leathery smooth skin. It is spherical and is as large as an orange. There are several chambers within, containing transparent edible, red juicy arils with seeds.

Versatile, pomegranate is used in cooking to add zest, to make juice in blends, as salad garnishes, smoothies and wine.  The juice from the seeds is the primary source of grenadine syrup which is used in liqueurs and flavourings. When eaten fresh, it is a very healthy fruit. Therefore it comes as no surprise that the pomegranate is highly valued for wellness and also highly regarded in many cultures for its various health merits.

Its origins span from Iran to northern India. It has been cultivated in the Mediterranean since the times of the yore.

The pomegranate is distinctive as it has been mentioned in Greek and Egyptian mythology as well as in the Jewish Torah and the Bible. Its appeal has been captured in art too. At the same time, some religions consider this fruit sacred.

In the 16th century, it was introduced to Spanish America and later by the Spaniards to California. Granada, a city in Spain, is named after the pomegranate.

It generally grows 5.5 metres to 7 metres. The season for cultivation varies as in the southern hemisphere it is March to May, but in the northern hemisphere, it is September to February. In tropical areas, pomegranates are planted between July to August, and in sub-tropical regions, from February to March. The trees bear fruits after a year.

Cultivated in loose soil, the pH should be approx 6.5 to 8. Manure and compost are added to the soil to make it fertile. Seedlings are planted in holes that are made ready by a row of trees. These seedlings should be three months old. In the 1st year, pomegranates shed naturally. Before harvesting the quality of the seeds needs to be checked for its standard.  Pomegranates are harvested by hand but are cut with scissors. They are ready to be picked 130 days after the tree starts bearing fruits.

Pomegranate seeds sprout easily without much aid. The seeds have to be cleaned of the arils to be planted in loose soil covering them by about half an inch. The seeds germinate in one and a half months in normal room temperature. To accelerate germination, the soil temperature can be raised. Heat is very crucial for pomegranate seed care.

Pomegranates are drought-tolerant and therefore need drip irrigation. Water management, fertilizers, and plant protection are the key factors that affect the output of the yield. Pomegranates tend to attract diseases and pests.

Excess water could lead to the crop suffering from fruit cracking, soil-borne diseases, pest attack, diseases and so on. Therefore, precision irrigation is essential for higher yield. It also balances productivity and moisture stress.

Its tree has glossy leaves, and big, vibrant flowers. One has to wait patiently for a few years for the fruit, pomegranate, to sprout. Its bark is strong and can be used for woodworking. Certain components in the bark and roots are used for medicinal purposes mainly to paralyze tapeworms.

Rightly known as the healthiest fruit on earth, it contains a range of beneficial plant compounds for our wellness. It has more than 40% of fibre and can be consumed daily. Packed with nutrients, it helps in boosting immunity. Therefore, the pomegranate is unrivalled by any other fruit when it comes to nutrition.

It primarily contains two compounds that have potent medicinal properties-

Punicic acid is a fatty acid in arils that has significant biological effects. It is found in pomegranate seed oil.

It has excellent anti-inflammatory effects which reduce the risk of heart disease by protecting LDL and cholesterol from oxidation, and also reduces the risk of type-2 diabetes, Alzheimer’s and obesity. It reduces inflammatory activity in the digestive tract.

It is suitable for arthritis, joint pain and prevents atherosclerosis. The good news is that pomegranate juice lowers blood pressure and treats erectile dysfunction. It naturally boosts fertility.

Pomegranate is an all-rounder health fruit which has the advantage of appealing to the palate, making it an all-time favourite.