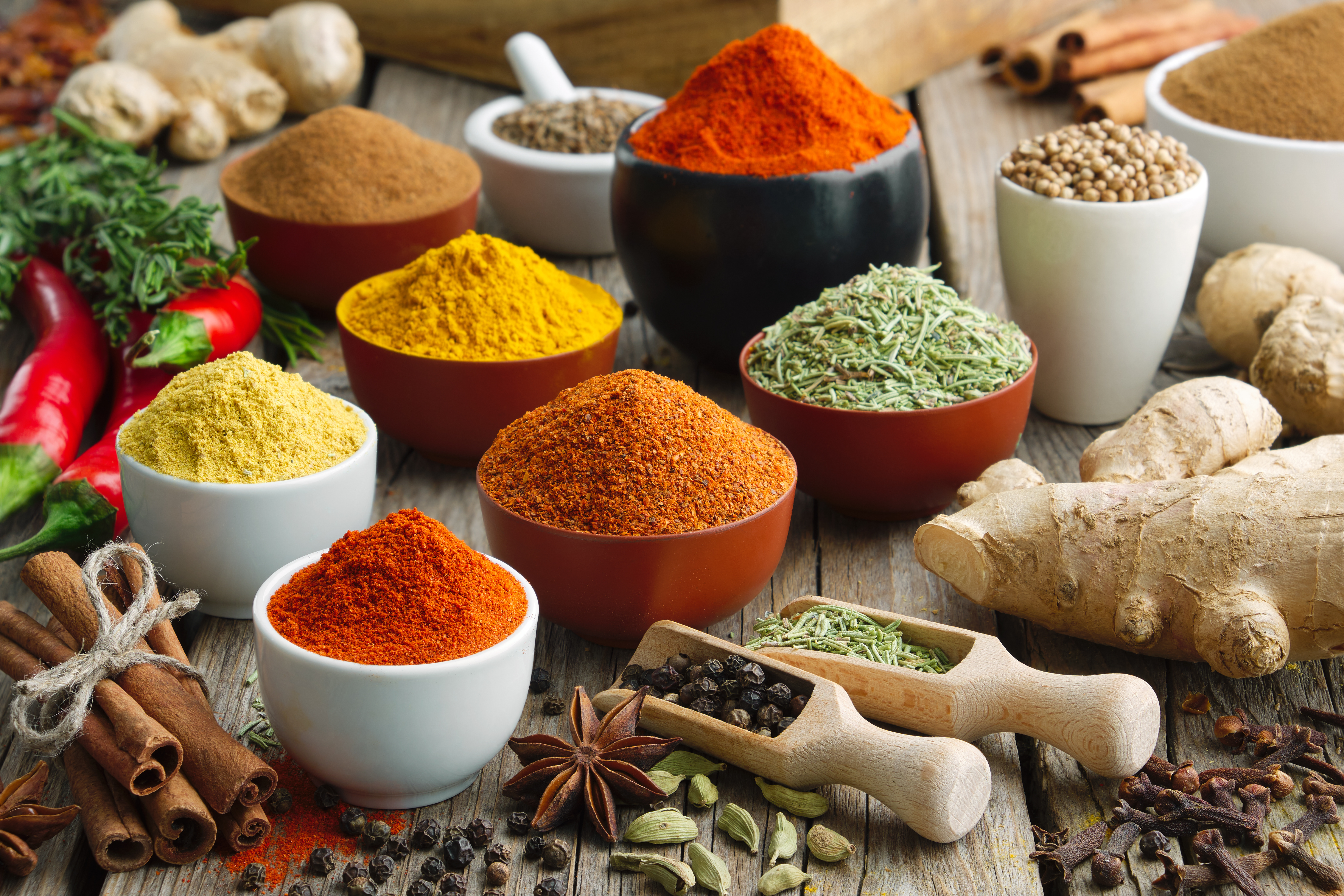 Let us once again talk about a few Indian states and the staples and spices they are partial to.

Maharashtra, the glamorous state, is a paradise for street food lovers – the vada pav, pav bhaji, golas, cheese club sandwiches and the list is endless. This coastal state is heavily dependent on rice. Jowar and Bajra are milled to make rotis or bhakri. To complement the jhunka, bhakri is made with chickpea flour and loads of chillies. Chickpea flour is a commonly used flour for making side dishes or fried snacks. Rice flour on the other hand is preferred for sweets like modak. Though the wheat consumption is relatively low. Beaten rice called poha and tapioca pearls or sabudana are among the all-time favourites and absolute essentials. The state is the birthplace of Alphonso mangoes. Seasonal fruits and vegetables are savoured with relish. The fishing community love their seafood and malwani food is a cuisine in itself. Homemade ghee, dahi and white butter are a must in every household kitchen. Kharwas is a speciality of the place. Coconuts like most coastal states are widely used. It is used as dried kopra as well as fresh and even as coconut milk. The vast cultivation of peanuts and sesame make them an easy entry into every kitchen. Tamarind and kokum are the most commonly used souring agents. Goda masala, koli masala, kolhapuri lehsun masala and saoji masala dominate the Maharashtrian pantry. The taste and aroma of god masala, koli masala and saoji masala differ from house to house. Every family would have their secret ingredient added to these masalas. Though many sweets are sugar-based, jaggery is preferred to make puran poli and modak.

Punjab is visualised as a vibrant and colourful state. The vibrancy of the place is reflected in the food as well. Punjabi cuisine is a culinary delight in itself. Mustard oil is a must in every kitchen. This is closely followed by ghee or homemade butter. Cooking is generally done in mustard oil, but the last tempering has to be with ghee. Garam masala, like sambar masala or goda masala, is unique to each house. Most of the families have closely guarded their garam masala recipes. The state is blessed with fertile soil and water. Wheat, in the form of flour and coarsely ground as dalia, is the staple of the state. No day starts without paratha with dollops of white butter and lassi for breakfast. Milk, curd and paneer are everyday staples. Mustard greens are a winter delicacy. Ginger and garlic need to be present throughout the year. Chicken and fish are enjoyed as butter chicken, tandoori chicken and Amritsari machchi. For proteins, white chickpeas and black Urad are made into chole and dal makhni. The tandoor is an integral part of the Punjabi cooking method. Most breads like roti, nan, and chicken are cooked in the tandoor. The spices are generally basic ones like turmeric, red chilli for heat and colour, coriander powder, cumin powder and dry mango powder. Dry ginger powder adds a unique taste to the dishes. Punjabis do have a sweet tooth and sugar in summers and jaggery in winters are enjoyed thoroughly. Punjabis are roti-eaters, but they do love their kadhi-chawal or rajma-chawal. Rice is long-grained basmati rice. It is a myth that Punjabi and Mughlai cuisine is the same. On the contrary, Punjabi food is quite robust and in many ways rustic. It’s food for physically hard-working people.

West Bengal is a land of rich culture and food. Bengalis unabashedly claim that nobody can cook fish better than them and yes, it’s rightly so. Fish is an integral part of their cuisine. You would also find other seafood like crabs and prawns widely relished. Mutton has been the privileged one over chicken in a Bengali home. Vegetables like pumpkin, various types of gourds, drumsticks, brinjals, banana flowers, unripe bananas and potatoes are widely used. They, like most coastal states, love rice and prefer short-grained rice. Mustard paste called kasundi is present in every kitchen. Turmeric, coconut and yellow mustard are ground with green chillies and this is used as a masala paste. Apart from yellow mustard, poppy seeds called “posto dana” or khus khus is a common condiment found in every household. A signature condiment mix called “panch phoran” takes the centre stage in a spice box of every kitchen. It is a mixture of mustard, cumin seeds, fenugreek seeds, nigella seeds and fennel seeds. Tempering is generally done with this panch phoran. Chana dal is the commonly used dal to make cholar dal. Refined flour or maida is used to make bread like luchi. Bengalis love the earthiness of mustard oil. It is used in all forms of cooking. Another interesting ingredient in Bengali homes is chenna. Chenna to a Bengali is what paneer is to a North Indian. Chenna is used in sweets and in savoury dishes. Bay leaf and cinnamon are also used in savoury as well as sweet dishes. Bengalis love their sweets and this is known universally. Rosogullas, sandesh, payesh, mishti doi and the list goes on. Sweets are generally healthy, made with milk or milk products like curd or chenna. Nolen gur or jaggery made with date palm is used as a sweetener in winters. People make or buy it in bulk and store it yearlong. It is believed to take the dish to another level of sweetness.

Though Indians are proud of their wheat rotis, rotlis, naans and parathas, rice of all kinds like basmati, short-grained, red rice, black rice and idli rice play a huge part in the Indian cuisine. Apart from milk, dairy is consumed in the form of curd, buttermilk, white butter and ghee. Seasonal vegetables and fruits are a must on a plate. Indians do love their non-veg too. Being primarily vegetarians, lentils have been a staple in most households. Variety of pulses are used as dals, sweets and savoury side dishes. Indians have mastered the art of pickling and pickles also enjoy their place on the plate. And the variety of staples the various states offer is a jewel in our crown.