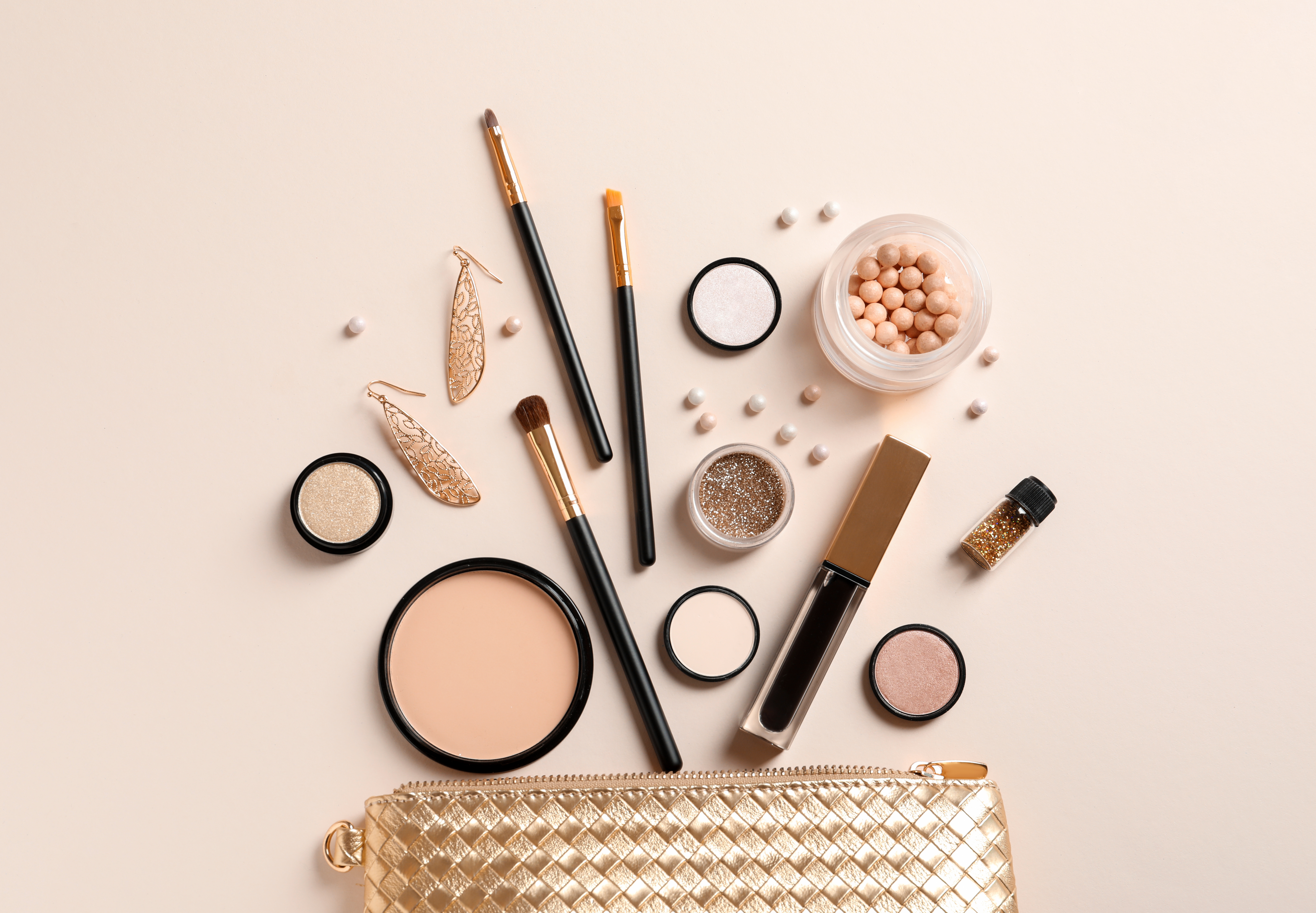 THE HISTORY OF MAKEUP PIGMENTS

The love story between women and makeup is famed. After all, you can’t deny the power of makeup. It not only acts as a confidence booster but also heightens the glamour quotient notches higher. So much so, that wearing eyeliner differently or applying a new shade of lipstick can bring about a change in the attitude. A shade more confident, for sure! That’s the magic of makeup.

And if makeup is magic, pigments are the magic word. Just one glide will not only transform the way you look, but also accentuate your features, and give you oodles of confidence to flaunt your best self.

Pigments are the heart and soul of makeup. Scientifically speaking, pigments are a type of material that creates colour through reflection and absorption. And simply speaking, it is the colour payoff. The intensity, saturation, concentration are all aspects of pigments. How long-lasting a shade is, or how bright or subdued colour is, depends on the pigmentation. The universal rule in the beauty world is “more the pigments, the better it is”. Although pigments and dyes are interchangeable, they are very, very different.

Are they interchangeable? Yes. Are they the same? Absolutely not! The main difference between the two is that pigments are insoluble, whereas dyes are blendable with their content. That’s because dyes’ molecules are small, but pigment molecules are much larger.

If you thought that pigments were a recent phenomenon, we have news for you. Pigments came into origin approximately 7000 years ago. That’s right! Pigments have been around forever!

They’ve not only stood the test of time but have witnessed the changing landscape of beauty. Today, the makeup industry is buzzing with a dizzying array of products. There’s even vegan makeup! Sure, the makeup industry has changed, but what has not changed is the enthusiasm and excitement of women for cosmetics. In fact, the intrinsic nature of women to experiment with makeup can be dated back centuries.

Curious? We were too. That’s why, we hopped on our time machine and journeyed through the ages, collecting stories rich with history, and facts that will leave you stunned. Come, let’s start from the very beginning. Let’s take a look at beauty through the ages.

In the ancient era, makeup was rudimentary. But that didn’t stop the women from experimenting with their beauty, especially not in Egypt, which is the birthplace of cosmetics.

For starters, Egyptian women also used ‘kohl’. But back then, they didn’t have the luxury of fancy brands. They used a blend of oxidized copper, burnt almonds, different coloured ash, lead, and ochre, to beautify their eyes. Carbon black was harvested from the soot of burning animal fats. They would rub Galena Mesdemet (made of Lead Ore and Copper) and Malachite (bright green paste from Copper minerals) to add a pop of colour.

Ancient Chinese women too cared about their appearance. They often used rice flour on their face to make it appear white. As for their nails, they would often stain them with Arabic, gelatin, beeswax, and egg. Gold, silver, black, and red defined their social status.

For women in ancient Greece, beauty has always been an essential part of their lives. The beauty standards in this era can be seen in depictions of Aphrodite – the Goddess of love, and beauty too, and other women in Greek mythology. In a bid to enhance their beauty, Greek women would often use crushed mulberries as rouge, Olive Oil and charcoal to define their eyes, and would paint their faces with white lead. Unknown to them, the white lead was extremely toxic.

It was only a matter of time before the Egyptians and Chinese became frontrunners in making pigments from Azurite, Malachite, and Cinnabar (a bright red colour – the first of its kind). Egyptian Blue was another colour that came into existence around 3000 BC. They were pioneers in hair dye and used Henna to camouflage grey hair.

Very soon, the Romans and Greeks caught up and entered the race by using plant-based extracts to make pigments, which improved drastically over a period of time. Colours or cosmetic pigments of certain hues came to be regarded as a testimony of elite rank and social status.
For example – Tyrian Purple, the most expensive dye, indicated royalty as only elite people could afford it. The Greeks also manufactured white lead to make flake white.

Inspired by Egyptians, Romans too entered the beauty game. In the beginning, Romans used makeup only for ritual purposes. But with time, makeup became an essential part of the lives of these women.

Ancient Roman women used barley flour and butter to mask pimples and blemishes. Sometimes they’d rub sparkling antimony (a silver-white metal) over their eyelids as an eye-shadow. They’d use blood on their fingernails for polish, unbelievably so. It was a time when mud baths were trending, and hair dyes for men were deemed fashionable.

It was in this era that India started using Henna as a hair dye, and mehndi too. For those in the know, mehndi is an art form painted on hands and feet using a paste made from the Henna plant. Mehndi is popular as part of Hindu weddings. Henna is also used in certain North African cultures.

The beauty and cosmetic trends in the middle ages were very interesting. It was in this era that cosmetic shifted focus from being a women’s only indulgence to those of men too. Men used cosmetics to stave off the appearance of old age.

It was in this era that perfumes became popular, and paler complexion was the fashion. It is believed that women would bleed to achieve a pale look. In a saner attempt, egg whites were used to get the desired pale skin. It appears that chalk-white complexion was favoured back then. And if history is anything to go by, that mindset is a reality even today. Italian women wore red lipstick to symbolize that they belonged to the elite class.

Women of this era believed in natural beauty. This is probably the only era where women were celebrated for what they were. Although the natural look was idolized, it did not diminish the use of cosmetics.

In the Renaissance Era, women valued pallor. Pale, ivory skin was highly desired. Women often used white lead to achieve paleness. This era was also rampant with powders like mercury, and vermilion (obtained from cinnabar). Mercury was often mixed with white lead to give the cheeks a soft blush, and to highlight their bust lines. Vermilion was used on the lips for a luscious red colour.

Soon, France and Italy rose as centres of cosmetics. European women followed suit by attempting to lighten their skin and blonde their hair. Blonde hair became popular, thus earning the title ‘Angelic’. England’s Queen Elizabeth 1 was a well-known endorser of white lead and created ‘The Mask Of Youth’ look.

This is that time in English history when Britain was ruled by Queen Victoria. Queen Victoria did not like makeup and insisted that women should wear only minimal makeup and look as natural as possible.

But we all know, even the natural look is far from natural. And that it indeed does require a fair share of makeup application. So here’s what women did. To get the perfectly pale look, they’d dust their faces with Zinc Oxide. For their lips, they’d smudge fruits or flowers, and they’d pinch their cheeks for a rosy blush, painfully so! At times, they’d use beets, or red-coloured bugs, or carmine. And to keep up with the doe-eye trend, they squeeze lemon juice or orange juice, and at times, stronger concoctions, into their eyes.

Having said that, the possible reason pigments were frowned upon and considered uncouth could be toxicity levels in the lead-based pigments, which were extremely hazardous. Soon, the development of cosmetics favoured by women emerged. Though not popular, beauty salons began to sprout.

Shortly after, women in the US drew upon their ingenuity and began creating their own mascara by applying wax to their eyelashes.

This was proof enough that the times and attitudes were changing, as was the makeup industry. The industry began to broaden its base by including colours that enhanced women’s beauty.

It was time for the rocking 20th century. And rock it did! It was when the Flapper look became a rage and redefined the roaring twenties. This era saw the emergence of a new breed of women with bobbed hair, short skirts, living it up in jazz clubs, with admirers aplenty.

Times were changing. So was the cosmetic industry. It was time for a facelift. Vanity cases now included the first liquid nail polish, foundation, powdery blushes, and powder compact. Around the year 1910, makeup became a fashion statement. With the movie industry boom in the 1920s, Hollywood played an influential role and had a huge impact on the use of cosmetics. It’s because of this that many present-day famous brands were born, and also when Max Factor rose to prominence. It opened a professional makeup studio in LA primarily for actors.

During this era, Coco Chanel forayed into the cosmetic universe and turned it around. It was the time when everyone wanted to colour in their life. Pink nail-paint came into style, and coloured cosmetics for hair and skin were in demand. It was when Leg Makeup came into being, in response to a shortage of stocking during World War II. ‘False’ introduced natural products packed with botanical ingredients like carrot juice and watermelon extract.

The 80s brought with it a dramatic change. Women got bolder, the colours got louder. Smoky eyes were the most sought-after look, and this was further accentuated in vibrant colours like fuchsia, electric blue, orange, and green were. The 80s was everything extreme – look, makeup, attitude, and confidence. Superstars like Madonna and Cyndi Lauper championed the change.

Today, makeup is breaking gender norms. It is for everyone, men and women alike. A large number of brands have cropped up. Unlike yesteryears, they follow strict protocols to provide absolutely safe products. Many brands that started aeons ago are cult favourites today. That’s because they’re constantly innovating with changing trends.

But today, makeup is beyond colours, palettes, and textures. Today, it is about self-expression, self-love and empowerment. It is no longer considered a tool to cover up your flaws. In fact, it is a weapon that enables you to enhance your strengths and beauty, and take on the world.

From the Ancient Era to the 21st century, pigments have played a mammoth role in makeup. What started as a humble attempt to look good, is so much more today. What’s left to see is, where will it go next?

To even greater heights, we assume.