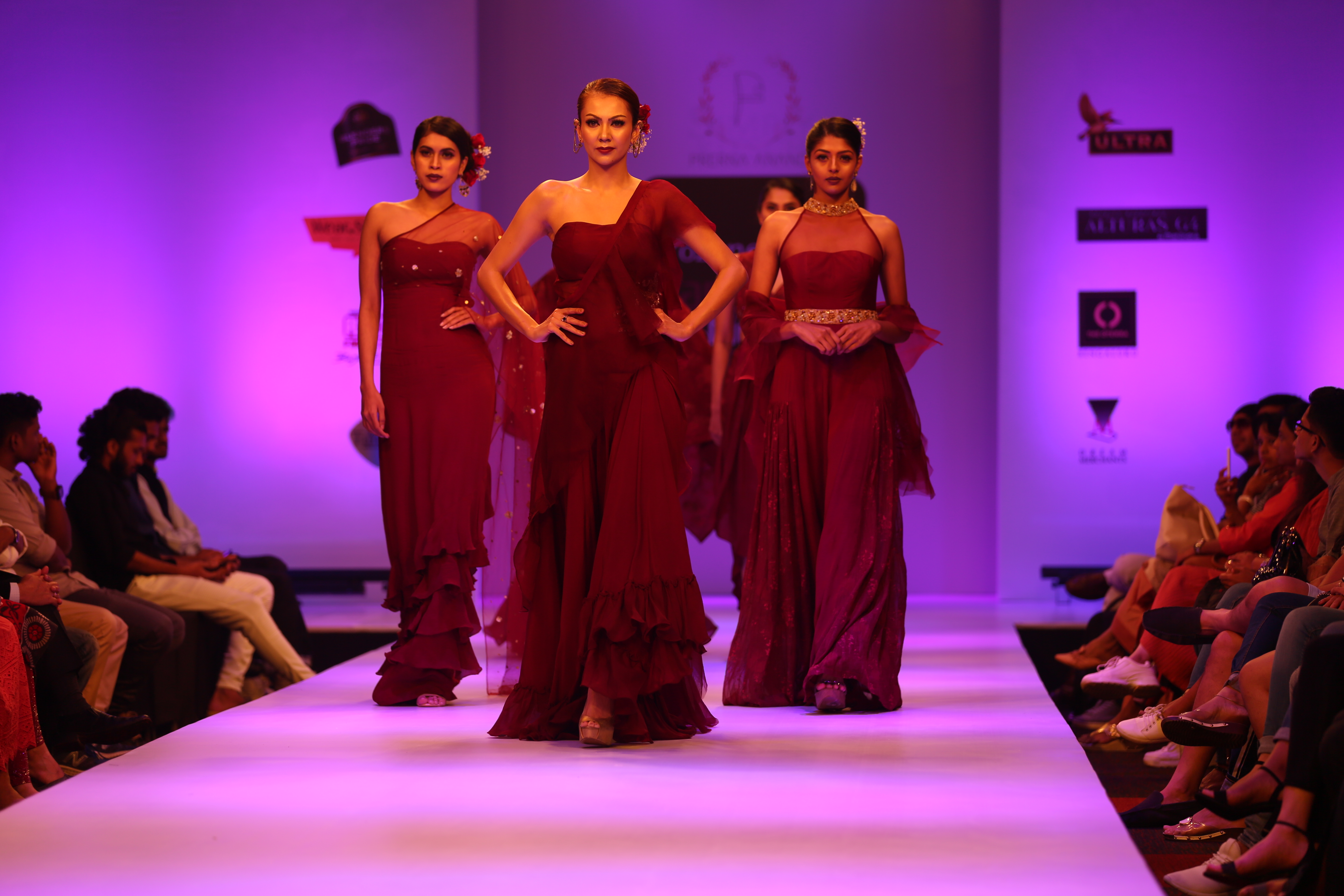 While the clothes certainly take a centre stage on the ramp, there is no denying the power of makeup to accentuate and convey the vision of the collection. The Ozone Bangalore Fashion Week was a riot of stunning ensembles augmented with the best beauty looks. This time, we went straight to the source and spoke to the stellar designers on what they envisioned and how it all came together.

Always pushing the envelope when it comes to fashion, the designer wowed the audience with his edgy creations. The showstopper was no celeb but rather the ikat fabric itself which was infused with new life by Swapnil.

Swapnil Shinde: I know that ikat is considered a very behenji fabric so to speak and I wanted to give it a very modern twist for the younger audience can get interested in it a lot more. Also, ikat being very geometric fits with my brand aesthetic easily.

As for as the lehenga and cholis were concerned, I wanted women to be extremely powerful and not be shameful about being who they want to be. A lehenga choli need not have a dupatta covering the head, a blouse cannot be so covered that the bride is suffocating, the jewellery need not be covered, it was almost my way of saying ‘just let it all go’.

Swapnil Shinde: If you notice, in the entire show the song was very strong which is why I wanted the eye to be very strong too. Also, I have been a huge fan of Deepika Padukone and have worked with her a lot of times. She has done this eye for Cannes and this is where I thought I must use it.

Flowy silhouettes teamed with remarkable prints sent out a loud message that yes, fashion is for everybody no matter what the age, size or gender.

Pria Kataria Puri: I spent a lot of time in Perra (Istanbul) and put the collection together there. The prints have been inspired by Istanbul, all of them are very modern and functional but also have a very strong element of the place. People have this misconception that tulips are from Amastadram but they actually originated from the palaces of Istanbul. That is why you saw a lot of tulips and prints taken from the Iznik tiles, which are again from the palaces there.

The process of creating the print is the most difficult and amazing process for me. Once the print comes out, it is very easy to convert them into a silhouette.

As for the silhouettes, my style quotient is always to be comfortable and glamorous. That is the reason I design free size clothes.

Pria Kataria Puri:  For me, the ideas come with the first sketch which in this case I prepared in Istanbul in a coffee shop. It was then that I knew exactly what makeup I was going to do and what kind of headgear.

For the makeup, I wanted a modern, funky look but at the same time, it had to have a little bit of that Turkish influence. The eyes are very important, so I kept that and incorporated the lip red as there is a lot of red in the collection.

Unlike anything before, Abhishek’s label Parole was created by both male and female inmates of Kolkata’s correctional home with the aim to empower Indian prisoners to attain an honest living. Models walked the ramp covering their face with slogans sending out a strong message.

The vision behind the collection

Abhishek Dutta: Parole, as you may know, is actually a term from the jail, where you get a few days to leave to meet your family. This is all about that, a small package of happiness that they get. The colours used in the collection such as aqua and white are very soothing. You would have noticed a lot of denim and layering.

This is the first of its kind brand and because of the concept, there is an emotional attachment to it. We have started this design collection in Bengal and wish to extend it to other states also.

Abhishek Dutta: I was looking for something that was subtle. Overdoing the makeup will not do justice for these kinds of minimalistic clothes.

Showstopper Iti Acharya: The makeup is very nude because I wanted the entire focus to be on the clothes and not on me too much.

A compelling fusion of Indian and Western, the collection was a riot with shades of burgundy and detailed motifs of dori embroidery.

Ashish Kumar and Diksha Sharma: Simply Kitsch is a label that works closely with the craftsmen. Our main aim is to promote the Indian crafts and add a touch of our USP to make it a collection that is with the time. We took our theme ‘Bedazzled hues’ and interpreted it in a more subtle way. We have played around with handwoven silk Chanderis dyed into ombre (which is a merging of colours).

Since it is a winter festive collection, we selected deep hues like burgundy and wines. The ornamentation of the garment has been done with dori embroidery in motifs which are jewel inspired, floral wines and medallions.

The vision behind the makeup:

Ashish Kumar and Diksha Sharma: It is about a presentability, makeup is always there to enhance the beauty of the garments. For our collection, you will see a burst of colours from down to up. As the garments are subtle and sober, we have added a little bit of drama for the eyes and hair.

Keeping in line with the collection that has interpreted crafts in a modern way, the makeup too is slightly modern. It does not replicate the bridal and heavy makeup. We have played around with the eyes and we have highlighted them through burgundies and wines, which goes well with our colours. In terms of the hair, it’s neat with high tail ponies with a little twist.

A stunning show, Manoviraj Khosla proved that one can be utterly glamorous any time of the day, be it while walking on the street or attending a red carpet event!

Manoviraj Khosla: All my collections are based around life itself and this particular one has a very rock star appeal to it. As far as the aesthetic is concerned, I think by the end of the day, everybody wants to look funky, cool and edgy and that is exactly where my focus is. I like mixing Indian and Western as long as it looks spot on.

The vision behind the makeup:

Manoviraj Khosla: My whole idea was very glam, so I was very clear that the makeup needed to be exactly that with a very street side, rock star and chic look. It was not something that was necessarily red carpet as far as everything was concerned. In the collection, I went from street to party to the red carpet. The makeup had to be something that looked chic through and through. You can start from the afternoon with it and take it right into the night.

0 comments on “Designer Talk: How makeup and fashion came together at Bangalore Fashion Week”