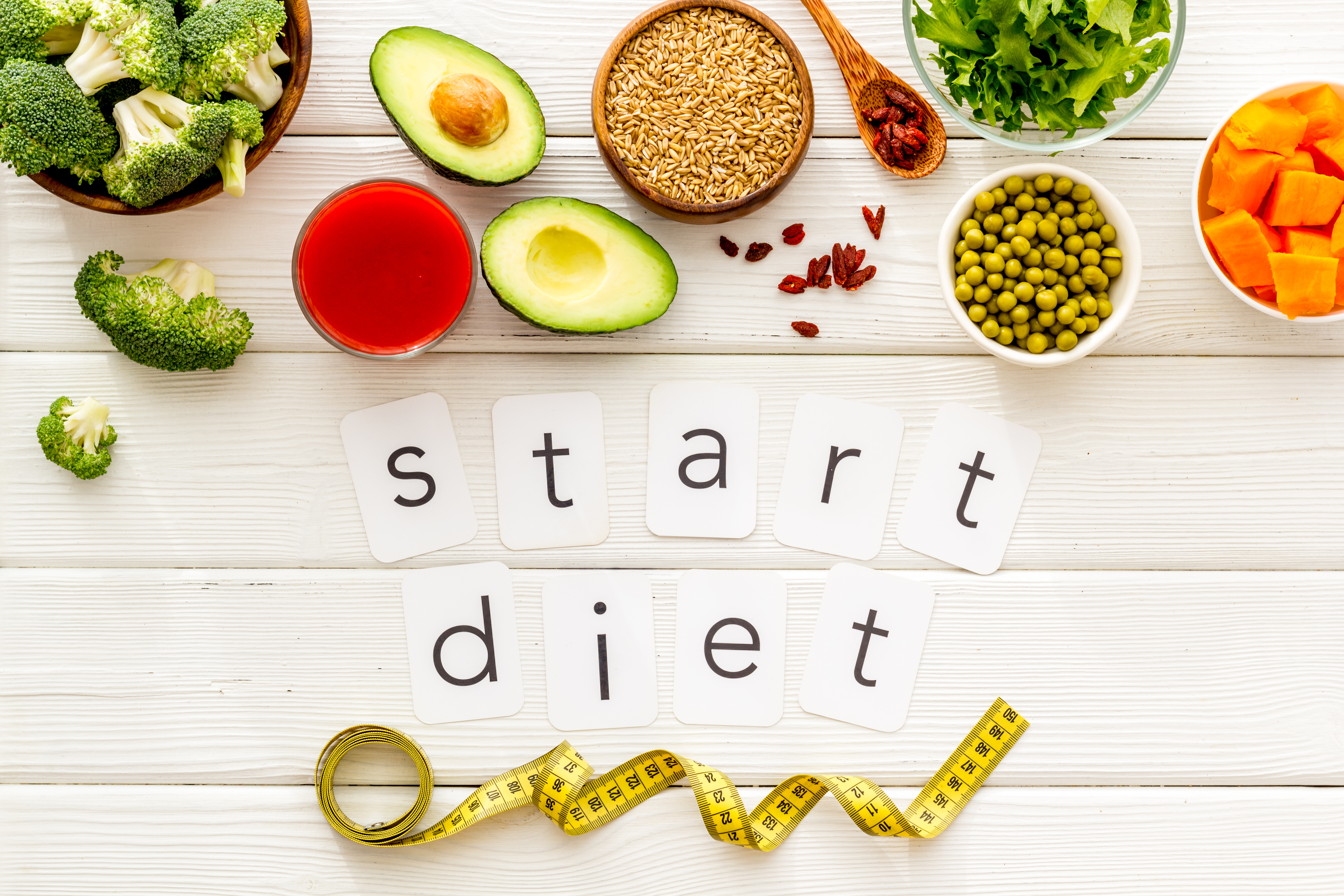 One of the most common New Year resolutions people make is to lose weight, become fit and eat healthy. Within a month, we are not able to fulfil the resolution due to various reasons. While office hours, sleep, and sometimes plain laziness are some of the common reasons, not being able to follow a strict diet to maintain fitness levels is an important reason too.

As we are staying at home the whole day during these unprecedented times, we tend to eat more than our share. However, this is also the best time to consider dieting for weight loss, fitness and healthier living.

Losing weight or being fit is no longer about just going on a diet by eating less or skipping meals. Science has proved that not eating, skipping meals or even eating less in a haphazard manner will not lead to weight management. What you need to do is find what kind of diets exist, do research on what kind of diet may suit your body and if it is feasible for you to follow. While a certain diet may work for say a celebrity, it may not work for you. Or it simply may not be feasible for you to follow, with your work schedules, climate and availability of products. So, for you to manage your weight, you need to find a diet regimen that works for you, both biologically and practically.

Many diet trends have been on the rise this year. We are going to list the top 5 diet trends along with how to go about it, who can benefit from them and why. Finding what works best for you and your body is almost as important as following it.

Gluten is a family of proteins found in wheat, rye and barley, which give the flour a glue-like sticky consistency. It is the sticky network that makes bread rise, giving it a good chewy texture. A gluten-free diet is an eating pattern which needs you to actively avoid anything with gluten in it.

Ideally this diet is best for people who are intolerant to gluten. They experience a distinct discomfort if they eat anything with gluten in it. The extreme version of this discomfort is for people who have celiac disease. It is an autoimmune disorder in which the body attacks itself and damages the intestines.

However, many people have taken to the idea of a gluten-free diet to manage their weight and be fit. They rely on dairy, eggs, fruits, vegetables, nuts, seeds, grains, starch and gluten-free flour, herbs and spices, spreads and oils, beverages except beer, meat and fish, for their nutrition.

One of the major reasons why a gluten-free diet is best for losing weight is because most junk foods contain gluten. When you start following a gluten-free diet, you start reading labels on any food that you buy. Most junk foods like burgers, pizzas, cakes, pastries, and other snacks have some or the other gluten content. When you avoid these and stick with unprocessed food like fruits, vegetables, nuts etc., the calories go down automatically, leading to weight loss.

Dietary Approaches to Stop Hypertension or DASH diet is, at its core, designed for the treatment of high blood pressure or hypertension. However, its clean eating approach, with less to no salt and portion control has attracted people watching their weight and wanting to get fit.

DASH diet is an eating pattern where you gradually lower your sodium intake until it becomes zero and concentrate on eating wholesome foods rich in nutrients like potassium, calcium and magnesium. If you suffer from hypertension, you may see a marked difference in the top number of your BP (systolic BP) in just two weeks. For chronic patients, it could be a huge health booster. For non-patients, it could boost their metabolism to better digest and absorb the nutrients in their food. DASH diet is also beneficial in preventing osteoporosis, heart diseases, cancer, stroke and diabetes.

The way to go about with DASH diet is to gradually reduce salt in your foods. Emphasizing fruits, vegetables and low-fat dairy, with moderate amounts of fish, poultry, whole grains and nuts, it looks at controlling portion size.

As DASH diet is not exactly planned as a weight-loss agenda, there needs to be certain control in terms of servings and portions. The addition of exercise to concentrate on fitness is also recommended. However, it is a proven fact that you do lose some weight when you reduce your sodium intake, which is at the core of the DASH diet.

More importantly, DASH diet is quite easy to follow practically.

One of the most popular diet trends, vegan is not just a diet anymore. Veganism has become a lifestyle order in the last decade or so. A lifestyle order, which has become so hot in the last few years, that even cosmetic brands are coming up with products that they are marketed as vegan. Veganism is a way of living where you avoid everything that is a result of any form of animal exploitation or cruelty. So, in terms of a vegan diet, all meat, fish, eggs and dairy products are out of your menu.

A vegan diet is easy to follow as it is simply eating plant-based food. So, you fill your days with fruits, vegetables, seeds, nuts, grains, and legumes. People follow a vegan diet and lifestyle for various reasons. It could be ethical and environmental concerns, cultural connotations or simply clean living. Some people take to vegan diet purely due to health concerns. A vegan diet is largely credited for an amazing weight loss, increased fitness levels and reduced risk in heart diseases.

Scientists have proved that vegans have much lower body mass index (BMI) than non-vegans and that it is a cleaner, ethical and simpler way to lose weight. It is one of the major reasons why an increasing number of people are turning towards veganism to live a cleaner lifestyle or to simply lose weight.

A vegan diet is proved to help balance out blood sugar levels and type 2 diabetes. It increases insulin sensitivity and the dietary fibre intake helps balance out the sugar response, which leads to a dip in the blood sugar levels. It also controls cholesterol and LDL, which along with a balanced blood sugar level, reduces the risk of heart diseases, significantly. A vegan diet is also beneficial in helping with cancer, arthritis, kidney function and Alzheimer’s disease. However, there is a community of scientists who believe that restrictions on animal-based foods leave the body short of certain nutrients that it simply cannot get from plant-based food.

As certain communities in our country have always been living a vegan lifestyle, since before even veganism was ‘discovered,’ it is quite a feasible and practical diet to follow in an Indian household. Just make sure that it is what your body needs.

Intermittent fasting is a pattern of eating and fasting that cycles between assorted periods of time. The idea of intermittent fasting does not depend on what to eat, rather it places the point on when to eat. Hence, in most countries, it is not termed as a diet, but as an eating pattern.

The most common way to follow intermittent fasting is by fasting 16 hours or 24 hours, once or twice a week. As fasting has been part of the evolution of humanity, it is not a new concept. Many religions undertake fasting in the manner of cultural significance. Science has recognised its health benefits for humans during the last two or three decades and so it has become a fitness regimen and a way of healthy living.

There are various version of intermittent fasting like the 16:8 method (where you skip breakfast, eat for 8 hours and then fast for 16 hours), Eat-Stop-Eat (where you fast for 24 hours, once or twice a week, going say from dinner to dinner) and the 5:2 diet (where you have only 500–600 calories on two non-consecutive days of the week, but eat normally the other 5 days).

This is a proven way to lose weight, well balanced out by regular exercise and not compensating by eating much more during the non-fasting period.

The intermittent fasting works by changing your body to believe in the limited intake of food. So, the body adjusts for such a scenario at a cellular and molecular level.

The human growth hormone increases which is greatly beneficial in weight loss and muscle gain. The insulin level drops due to insulin sensitivity which leads to body fat becoming more accessible. Cellular repair happens fast. Fewer meals mean fewer intake of calories so intermittent fasting is said to be a powerful way to reduce weight.

As far as Indian households are concerned, we have followed the method of fasting since before it was a trend. Even now, it remains the most practical way to flush toxins out of your body, give your metabolism a rest and lose some pounds on the way. It is a method that is easy to follow, without too many hassles and without compromising on your food.

A paleo diet, aptly named due to its connection to the Paleolithic era, is based on what was eaten during that time. So, from 2.5 million years to 10,000 years ago, humans hunted and gathered what they could eat. A paleo diet consists of that food. So lean meat, fish, vegetables, fruits, nuts, and seeds are all included in the paleo diet. Grains, legumes, and dairy products, all of which are the results of farming and animal husbandry that originated 10,000 years ago, are excluded.

The idea behind the paleo diet is that the human body was always genetically predisposed to eating and tolerating what was being eaten during the Paleolithic period. Farming and animal husbandry led to additional staples in the human diet that are essentially not needed. Followers of the Paleo diet say that our bodies are mismatched genetically to the modern diet that emerged with farming.

Whatever the belief, the paleo diet has been proven to help with weight loss, balance out blood sugar levels, cholesterol levels, blood pressure levels, and appetite management. However, it has also been said that the paleo diet leaves out a whole lot of nutrients which have led the followers to take supplements. Paleo diet is rich in fruits, vegetables and nuts, which fulfil almost all the nutrition needs of the body. However, the fact that it relies so much on naturally produced food makes it a tad too expensive and impractical.

Whatever diet pattern you decide to follow, it is important to know your body well before undertaking any of it. All forms of diet emphasise the importance of exercise. So just eating or not eating is not going to help maintain your weight and health. It is equally important to work out. Also, if you have any underlying diseases, it is best to consult your doctor before starting any diet. It is always better to err on the side of caution.