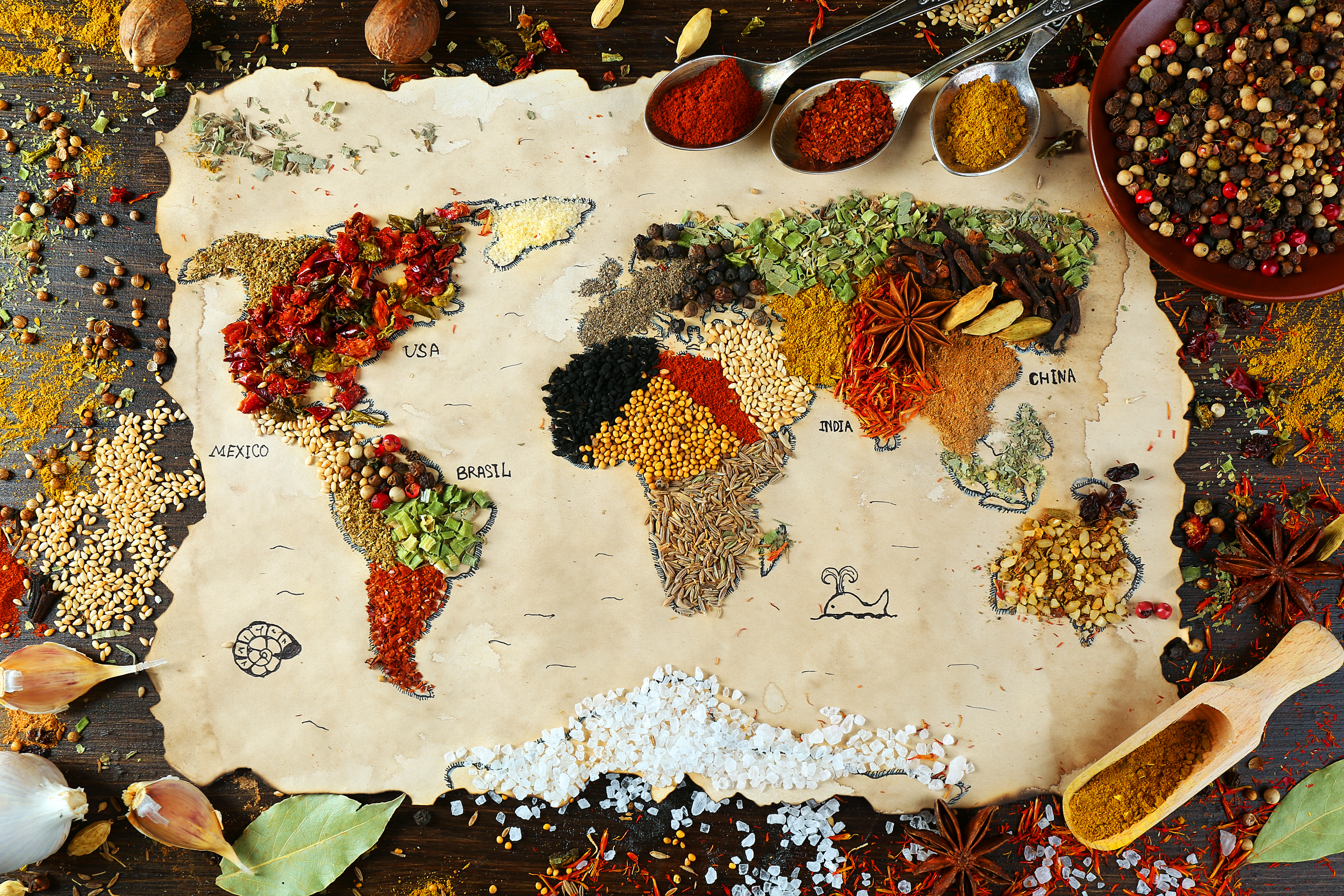 Food has always been a representation of people’s way of life. The cuisine of a particular region or country reflects the likings, value and culture of the locals. One can say this because the locals have a specific palate that, generally, revolves around the vegetation and climate of the place. Any cuisine takes ages to evolve, develop and be what we know today.

Every regional or country cuisine has its own distinct flavour. These flavours come from some ingredients exclusively and widely used in that particular cuisine. In this story, we will take a sneak peek into four different types of cuisines and their distinct ingredients.

Chinese food is a perfect fusion of plants and animals that are grown or bred locally. This cuisine uses a lot of Sichuan peppers that resemble its distant cousin the Indian black pepper. Chinese, like Indians, consume a variety of herbs and aromatics like ginger and garlic. The aroma is such an integral part of their life that even the oil used for cooking is groundnut or peanut oil. The oil adds a different level of distinct flavour. Chinese fares are not complete without a mention of the varied sauces that are used. Soya sauce, both dark and light, is a staple in this cuisine. Similarly, oyster sauce is another widely used sauce that turns every dish into a lip-smacking one. The Chinese have rice and noodles in any form. Rice and noodles are had as soups, snacks, main course and even desserts.

From the east, we move to west, to the land of pizzas and pasta. Italian cuisine is one of the most relished and sought-after in the world. Italians take pride in their skill of handmade pasta, homemade mozzarella and their fresh produce. This cuisine is not just restricted to pizza and pasta but offers a whole lot of yummy goodies.

Italians unabashedly are self-proclaimed foodies. They kick start their day with milky coffee, croissants and biscotti. Indians can get a taste of biscotti and croissant as they are readily available online. Their staple includes extra virgin olive oil which they swear by. They also use balsamic vinegar in salads and crostini. What coriander is for Indians, oregano is for Italians. They can’t live without fresh oregano. Italians love their pasta and have their carbs as appetisers or main course. Pasta sauces are generally made with freshly-plucked tomatoes and herbs from their farms. Another essential ingredient of Italian cuisine is cheese. Different types of cheese are used for various courses of meals. They can be served as snacks, sprinkled on pizzas and pasta or can be turned into decadent desserts. Parmigiano, ricotta and mozzarella are a few that are widely used and readily available in Indian stores too.

Each cuisine in the world is so unique and full of flavours that it’s hard to miss any. Another flavourful cuisine is Thai. Thai cuisine is a perfect amalgamation of five tastes, i.e., sweet, sour, bitter, salty and spicy. The locals of Thailand predominantly eat rice, especially jasmine rice. Apart from the locally grown vegetables, seafood dominates the plate. Most of the dishes do have fish sauce as the main ingredient as it adds a salty-sweet flavour to the dish. Bird’s eye chillies and ginger ensure a kick to every dish. The aroma of the food is enhanced by lemongrass, basil, and kefir lime leaves. Tamarind and lime are used to add acidity into the food, and bitter gourd balances it out with its bitter taste. Most desserts have palm sugar and coconut milk. Thai red curry and green curry paste form the foundation for most Thai curries.

From the Far East to the far west, let us enter the vibrant Latin American country of Mexico. Mexicans (erstwhile Aztecs and Mayans) introduced cocoa to the world. Chocolate and cocoa are the essentials of Mexican cuisine. Corn is another staple of the Mexicans. Nearly 60 types of corn are grown in Mexico alone. They come in all shapes, sizes and colours. One can see white, blue and purple corn apart from the regular yellow. Corn is used in various forms like cornmeal, corncob and corn pearls. The flour is used to make tortillas, tamales and soups. The tortilla is the basic form of bread widely consumed in Mexico. Dried beans like navy beans, red kidney beans, pinto beans and black beans are relished daily. Mexican cuisine has a varied range of heat, from mild jalapenos to hot chipotles en adobo. Herbs like thyme, marjoram, bay leaf and oregano rule the kitchen pantry. Mexican cooking is incomplete without avocados, tomatoes and lime.

Mexican cuisine has given the world the most favoured snack, popcorns. Though popcorns have transformed a lot today, the humble salted one was what the Mexican ancestors preferred.

Each country or region has its own distinctive flavours. They are generally because of some ingredients that are a must in the pantry, fridge or kitchen garden. The kind of fat that is used depends on the climate. The colder the climate, the more the use of butter or lard. With a warmer climate, one sees more use of liquid oils like olive oil, peanut oil or sunflower oil. Similarly, the produce of local fruits, vegetables and herbs decide the taste of the traditional foods. Rearing of the different types of animals for consumption is also dictated by climate and culture. Though the Chinese prefer worms and insects that are fried, their neighbouring Thai locals prefer seafood. Mexicans are known for their love for pork. Italy is refreshingly a paradise for vegetarians, though they love their meat too. Thus, one can see that the essentials differ with every cuisine making each one delectable in its own way.