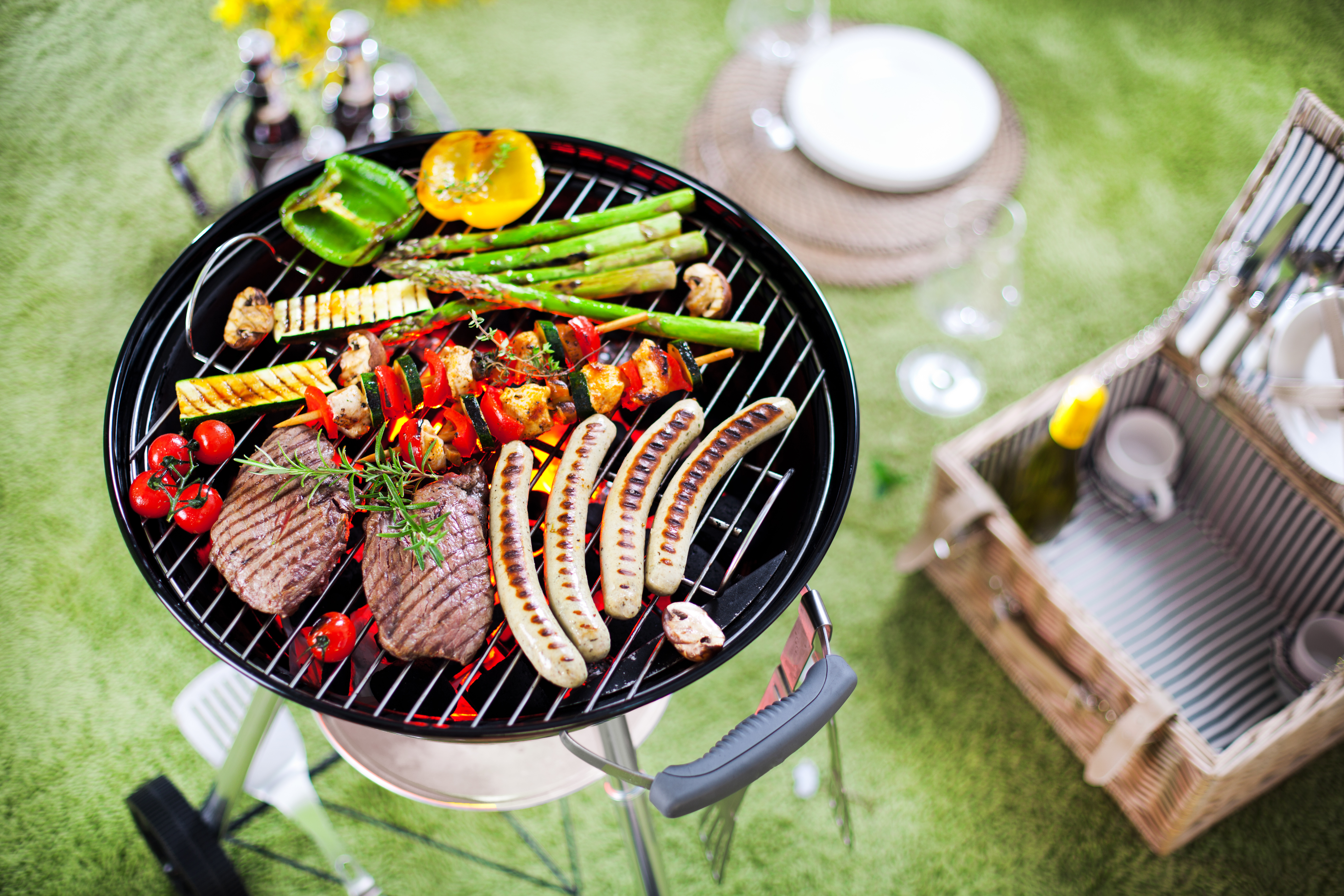 Barbeque is a pleasant way to send aromatic invitations to the neighbours. Cooking outside in one’s garden or terrace is a beautiful way of encompassing nature into our foods. It has been a long time tradition in many western countries. It symbolises the onset of summers and “letting down your hair” atmosphere. The laid back culture called barbeque originates from the word “barbacoa”. It is a word from a language spoken by Caribbean Indian tribe Taino. Barbacoa means “grilling on a raised wooden grate”. Barbequing has been one of the oldest ways to cook fresh hunt or catch. In ancient times an open fire was lit, and the meat was hung over it to slowly cook. This gave birth to the modern time technique of barbeque.

How much ever the ambience may sound relaxed and easy, barbeque at home does need a lot of planning. The seemingly tedious and complex process can be eased out if one understands the science behind the right amount of heat, spice and grease on the right kind of meat or vegetables. Barbequing at home also requires certain equipment and tools. Though one need not go on binge shopping, it is advisable to have a few handy paraphernalia.

Apart from the barbequing gadgets, the piquant process needs planning of basic spice mixes, knowledge of marination and above all food choices of the people enjoying.

Let us take a sneak peek into the basic tools, spice and sauces that can help in the mouth-watering process.

The most important thing for barbequing is a grill. It is also called a “hibachi”. Hibachi can be charcoal grill or gas grill or portable or electric. A charcoal grill, as the name suggests, requires charcoal and wood to cook the food on it. It adds a smoky flavour and aroma to the food. The main drawback is cleaning after the BBQ party. The gas grill, on the other hand, does not add any such flavour or aroma but the food cooks in its own fats and juices. This is for people who want food in a jiffy. The portable ones are for picnics but cannot cater to a large crowd. The electric one is perfect for the urbane crowd. The huge minus is the lack of the smoky flavour which most people expect in a BBQ. These hibachis come in various sizes. One can pick up a size that is suitable for one’s convenience. A grill also comes with a lid that helps in steaming, roasting, smoking or simply cooking meals. An offhand rule says covered grills work well with vegetables that do not need a lot of heat. And an open grill is perfect for non-vegetarian cuts. A closed grill ensures even circulation of the heat, thus aiding in consistent cooking.

While most of the houses do not have a grill, the closer to home version, tandoor is the best alternative. If tandoor is also not an option available, most electric ovens come with the facility of a rotisserie and grill. One can also whirl up yummy barbeque like dishes in normal homely gas stoves. Cooking with cast ironwork or a small grill on the gas flame works up well. The smoky flavour and aroma can be induced in the food through the method of “dhungar”. This is a process in which food is kept in a large bowl, and hot burning charcoal is put in the food and some sort of fat, usually, ghee, is added. When the smoke starts emitting, the bowl is sealed well. The smoke is trapped inside, and the food absorbs and gets infused with the smoke. When the smoke settles down, one can remove the charcoal.

Apart from the barbeque grill, one needs tongs, grill forks, charcoal, aluminium foils, spatula and bamboo skewers. Tongs help to hold or flip the meat or the vegetable. Grill forks also help in cooking the food. Charcoal is the main fuel for cooking. Food can be kept on the foil so that it does not get burnt. The spatula helps to flip and toss the food. Bamboo skewers should be well soaked before using them as they might catch fire. Apart from these, a thermometer would be handy. Many have their own preferences on how their meat should be. A thermometer helps us to know the temperature inside the meat.

Apart from the obvious barbequed ingredient like meat, fish and vegetables, marination forms the most important base. Marination requires three basic ingredients: acid, fat and seasoning. Acids can be in the form of lemon juice, tamarind paste, yoghurt or vinegar. It is best to use a single type of marination on one ingredient. For example, if fish is marinated in lemon juice, avoid any other acid. The acid helps in breaking down the meat and aids in cooking faster. Too much acid also dries up the meat or the ingredient. Indians have their own secret ingredient; the raw papaya paste. The raw papaya also acts as an acid and helps to cook the meat well. Fat can be in the form of butter, oil or lard (animal fat). This forms a protective covering and prevents the ingredient from getting burnt. Seasoning is a personal choice. While some like fiery hot and others like mild or no spice at all. Seasoning offers space to be creative and go crazy.

Spices depend on the guest list. Generally, an Indian barbeque party calls for robust and palate tingling spice mixes. Apart from the regular spices tandoori masala, garam masala, turmeric, chilli and mustard are a must. Barbequing for French guests is fairly easy in terms of the number of ingredients. A simple lemon and thyme marination and salt and pepper work well. A Middle Eastern guest would love a tang of sumac or five spices in their meat, fish or vegetable. Moderately spices food if generally enjoyed by all.

Corn cobs can be rubbed with salt, red chilli powder, chat masala, butter and lemon juice. This can be grilled over the gas stove directly. Smoke can be infused with the dhungar method. One can also rub a mix of mustard sauce, lemon juice and salt and pepper and grill the cobs.

A whole fish or fillet can be marinated with salt, lemon juice, mustard oil and a paste of green chillies and yellow mustard. This can be grilled and served as an appetiser. The leftover grilled pieces can be added into a gravy to create a finger-licking curry.

Click here to buy from a variety of fish and seafood

Prepare a green chutney with mint, coriander, green chillies, lemon juice and salt. Toss in paneer cubes into the chutney and leave it for 20-30 minutes. Grill them and serve with dhaba style pickled onion rings. These appetisers will vanish once it is out of the kitchen.

Barbequing is therapeutic. The process involves both the guests and the hosts. The vibes turn happy, vibrant and full of energy. One can start off the crowd-pulling job of barbequing with the basics at home. All it needs is friends, a tried and tested menu and a chef’s cap to add an oomph factor.

0 comments on “Essentials to barbeque at home”