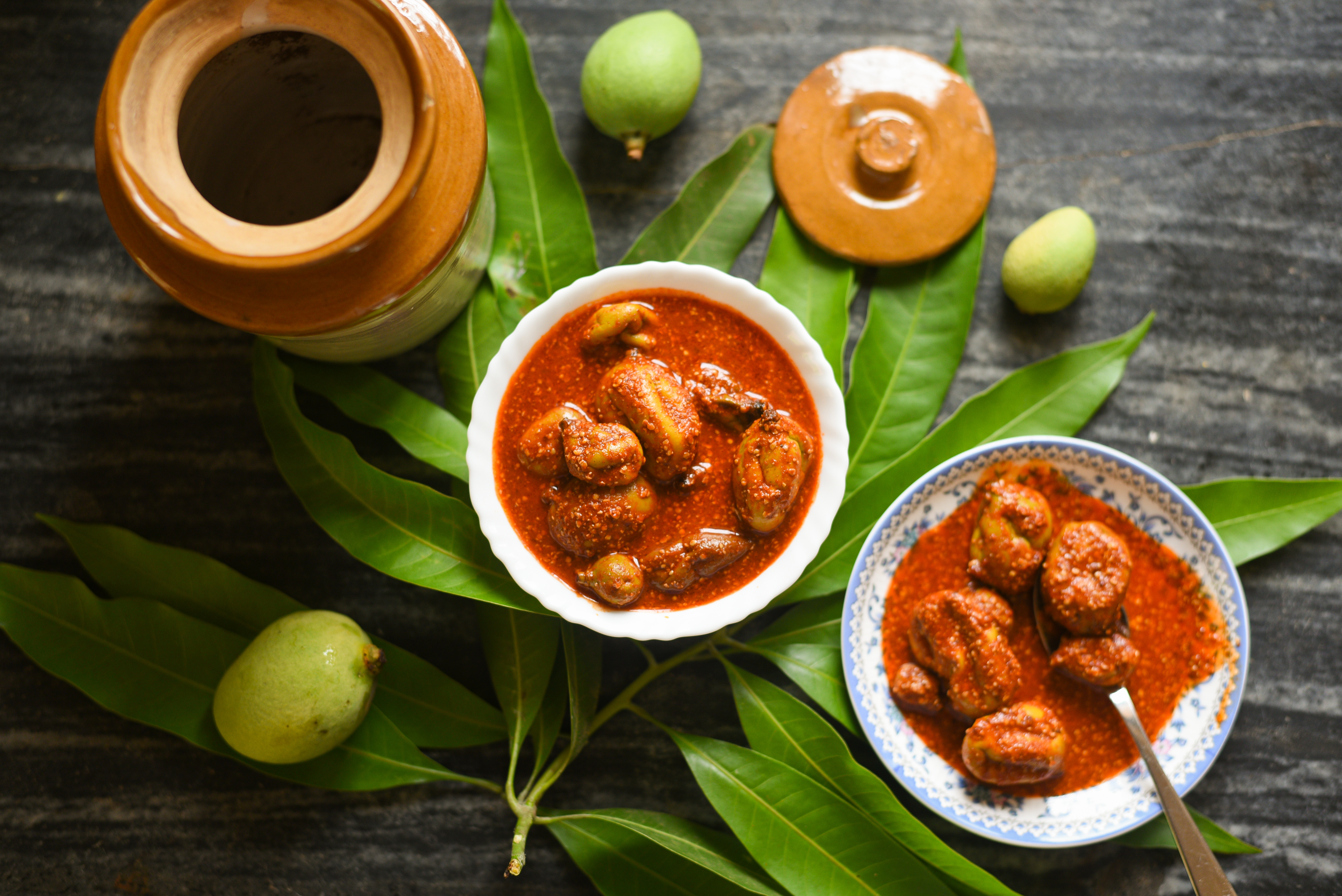 Thinking of what dish or curry to prepare for the day is one of the most annoying things ever. You have to think of who likes what vegetable, whether or not it goes with rice or chapati and then to wonder if you have all the necessary ingredients ready in the first place. And if you realise that all the thought and effort you put into preparing the food is wasted because one person in the family is not too fond of the vegetable you prepared, you are truly in a pickle.

Talking about pickles, one of my fondest memories of childhood is spending the days playing with cousins in our native village and sucking on to a salted and pickled mango piece, during the summer holidays. Grandmother would have made many ceramic pots (Bharani) of pickles from various vegetables or fruits like mangoes, gooseberries, chillies, carrots, hog plum, mixed vegetables and so much more in different flavours. Unlike today, no one was worried about too much salt or too much heat from the chilli.

Pickles hold a special place in the hearts of Indians. It is a quintessential Indian mother’s go-to alternative to vegetable or curry. It is an Indian bachelor’s everyday flavour to go with dal rice and curd. And it is the best companion of khichdi and paratha.

Let us trace some history of this flavourful Indian dish. Pickles, although called by various names across India, has a history going back thousands of years. While etymology traces the word pickle to Dutch word pekel which means brine, achar has been borrowed from Persia which means salted or powdered meat or fruits preserved in honey, vinegar, salt or syrup. As it happens, pickling started as a method to preserve seasonal food items throughout the year and to consume them while travelling.

Across the country, various vegetables, fruits, nuts, leaves as well as meat and seafood are used to make pickles in salt, sugar, honey, vinegar, syrups, broth, brine etc. India even exports pickles to about 54 countries across the world. With a rich cuisine in itself, pickle has a very esteemed presence in all local cuisines of India. A thali or Indian platter anywhere is incomplete without at least two to three varieties of pickles.

So, let us find out what makes pickles such an important part of our country’s rich cuisine.

Although flavours remain similar, methods of pickle-making have evolved or changed over time. Traditional methods of pickle-making, while still followed in homes in villages and towns, were not known a lot for a brief period. However, with the demand for more locally and organically made foods on the rise, many small entrepreneurs have put their efforts into making pickles the traditional way and market them as such.

Traditionally, in most Indian households, there is a pickling day during winters and summers. Seasonal vegetables, leaves or fruits to be pickled were brought in hordes and cubed or sliced into various shapes and sizes. These were then dried for some days in the sun and then added to various ceramic pots or glass jars with various spices. The spice concoctions were made of salt, sugar syrup, jaggery, oil, vinegar, broth or brine, herbs, and other additions like chilli powder, pepper, turmeric, tamarind, clove, cinnamon, lemon juice, cumin powder, ginger and garlic pieces, mustard oil and seed etc.

Click to buy from a wide range of spices, herbs and seasonings.

These pots were then stored for an extended period of time for the fermentation process to happen. India traditionally uses oil, salt and vinegar to make pickles, out of which most households use oil the most. Some cultures bury the pot under the earth to ferment and take it out only after six months, while some, like Gujarat’s sweet chundo, are left out in the sun for forty days to mature.

The anaerobic fermentation process that happens between the sugar content of the dried food and the spices and oil it is stored in, ensures the longevity of the food and its flavour. It does not require refrigeration then and can stay flavourful for months together.

While mangoes are the most common fruit to be used throughout the country, other items like gooseberries, apples, lime, lemons, cucumbers, green chillies (as it is or stuffed with spices), ginger, garlic, tamarind, carrots, hog plum, roselle leaves (gongura) are some of the common items used to make pickles. India also has pickles made out of cured meat and seafood, like shrimp pickles, mackerel pickles, mutton pickles, chicken pickles, prawn pickles as well as nuts like cashew, groundnut and almond.

India is also home to some lesser-known but extremely flavourful pickles like mesu pickle from Sikkim which is basically fermented bamboo shoots, a pickle made of the world’s hottest chilli from Assam bhut jolokia and that from the banana flower, Himachal’s lingri or fiddlehead fern with its sweet-hot flavour, the highly spiced up curry leaves pickle from Tamil Nadu, Goan brinjal pickle, orange peel pickle from South India, as well as a lovely flavour from Jammu Kashmir made of pickled lotus stems.

While there are many brands in the market, which add unnecessary flavouring and preserving agents to various pickles, most of the brands are organically made with simple salt, oil or vinegar. This has led the traditional Indian achar to be included in diets and health food menus as well.

Consuming pickles may have started as a method to preserve seasonal fruits and vegetables and to have an imperishable accompaniment with chapatis and rice while travelling. However, studies and subsequent uses have found that consuming pickles also have many health benefits. As most pickles contain salt, consuming it with food ensures the growth of probiotic bacteria or gut bacteria in your intestines. These are extremely useful for your gut health and overall metabolism.

Pickles are made of various raw vegetables and fruits preserved in different spices and brine. As the fruits and vegetables are preserved, the antioxidant properties in them also get locked in the process. These antioxidants are useful to fight free radicals that cause various illnesses. They also help in building immunity. There have been studies that say that consuming pickles is good for our mental health and nervous system. Children often are not keen on consuming fruits or vegetables. Giving them pickles is a good way to ensure that they get necessary nutrients of fruits and vegetables through them. The various spices used in pickles are good at building resistance in the body and protect children from common colds and flu.

When raw fruits and vegetables are preserved in pickles, it also preserves the fibre content in them. This is good for your metabolism and muscle strength. Acetic acid produced during pickling boosts haemoglobin levels but this works only in pickles with low salt content. As for flavour, it is a scrumptious alternative to curries and chutneys, to go with rice, paratha, chapatis, dosas etc.

As earlier, pickles used to be prepared during summers, its consumption during winters is said to provide heat to the body, thereby protecting it from cold and illnesses. So, next time you dole out a spoonful of that delectable pickle, whether store-bought or homemade, remember that it is not just a food item. It is part of your history.