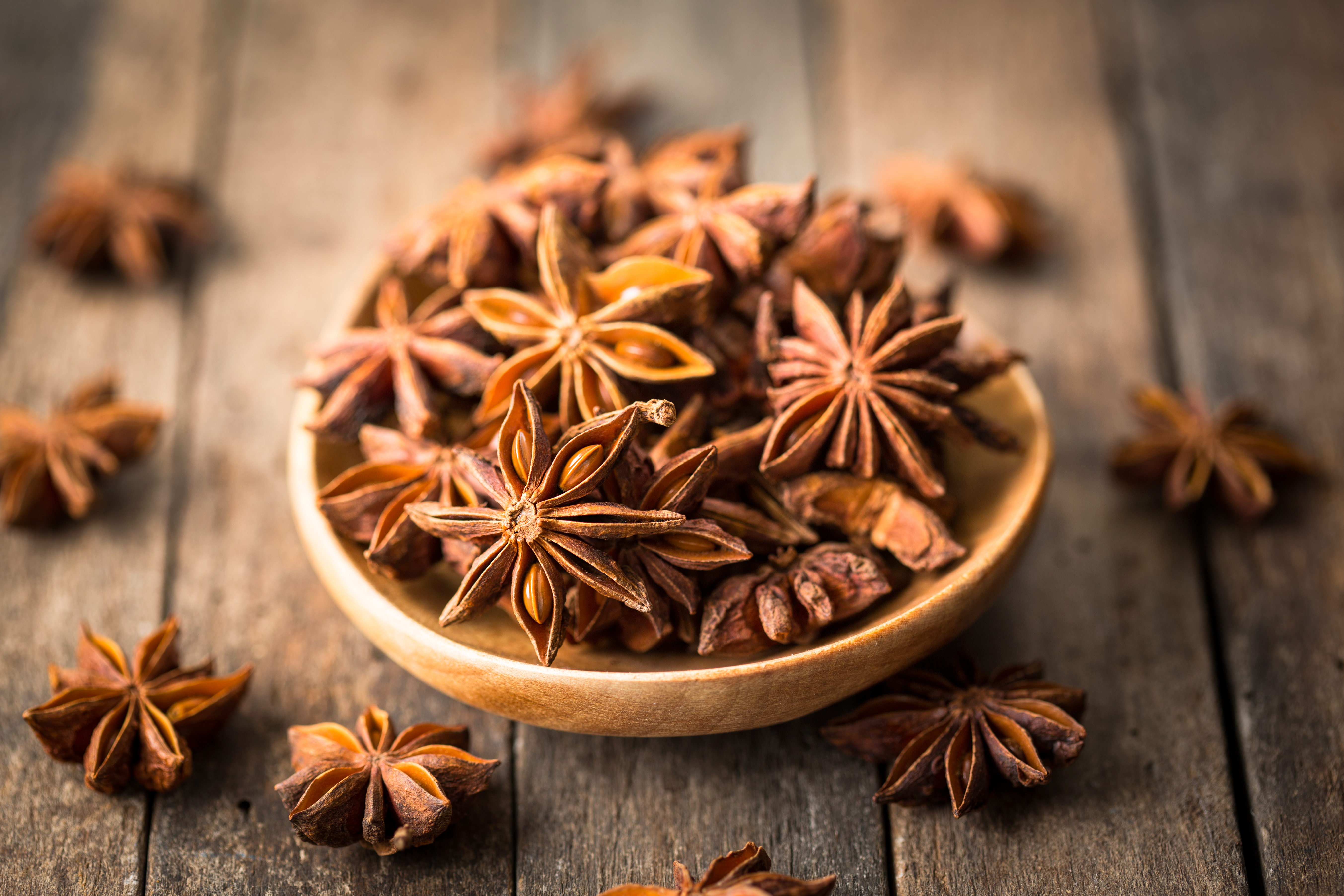 This star-shaped spice is a staple ingredient in various international cuisines.  This exotic star fruit or ‘chakra phool,’ as it is called in Hindi, is also famously used to prepare masala chai, biryani and other lip-smacking delicacies. Its fame has spread far and wide and is a regular in Indonesian, Malay and Middle Eastern cuisines. Its warm, distinctive aroma works well in Chinese dishes as five-spice.

Star anise has a sharp liquorice-like fragrance and is considered a healing herb.  As the fragrance is overpowering, it is best to use star anise sparingly. The biological name for it is Illicium verum, an evergreen tree which is a native of China and Vietnam. Belonging to the Schisandraceae family, like clove, star anise is plucked before it is ripened and dried before using.

It has antifungal, antiviral, and antibacterial properties and thus is used in a number of healing practices.

The plants of this amazing spice are rapidly-growing evergreen trees, diminutive and condensed like a hedge.  Seeds grow best in temperature that varies from 19–20 C.

The star fruit consists of 6 or 8 horns each having a seed and it requires partial sun thus, making it intolerant to cold climes and dry winds. It can grow in any type of soil which is slightly acidic but needs moisture. Compost can produce a good yield. As it is a fast-growing tree, pruning keeps it well-maintained.

Spices are often a wonderful and easy source of potent, health-giving compounds. Star anise is no exception to healthy goodness and nutrition. Its bioactive compounds make it an important contributor of polyphenols and flavonoids which are essential to maintaining good health. It is noted to be good for digestion.

It has many compounds like anethole which is a flavonoid that gives the spice its unique flavour and antifungal properties, linalool has a calming effect, limonene is a flavouring agent that promotes weight loss, treats cancer and bronchitis, quercetin can help treat heart ailments and maybe cancer, shikimic acid that has powerful antiviral properties, and gallic acid that is antioxidant and anti-inflammatory.

Another important medicinal benefit of star anise is its ability to hinder the growth of bacteria in various common illnesses.

Besides building up the immune system, the star anise oil has carminative properties. The oil is extracted from the seeds contained within the horns or pods of star anise. It may have numerous benefits for pregnant women too.

Some more benefits of star anise are

It decreases the onset of wrinkles by hydrating dry skin.

It prevents infection in wounds and relieves skin inflammation.

It improves digestion and reduces nausea.

It helps in preventing the growth of fungi and bacteria.

Twist in your dish

Star anise is used for both, aroma and sweet flavour. It is one of the main ingredients in the traditional Chinese five-spice seasoning. In Vietnamese ‘pho’ which means broth uses star anise as the main seasoning.

The aroma is a cross between cinnamon and clove. The presence of an active ingredient, anethole, makes this spice much sweeter than sugar, therefore lending itself to Christmas cakes and Czechoslovakian sweet braided bread Vanocka.

Star anise is used as an optional spice in the preparation of the tradition French mulled wine Vin Chaud.

Star anise is different from aniseed.

In Japan, the bark of the tree is used as incense for its aroma.

Star anise trees can bear fruit for more than 100 years.

It could improve moods and reduce depression

0 comments on “Star anise – The star in your kitchen”