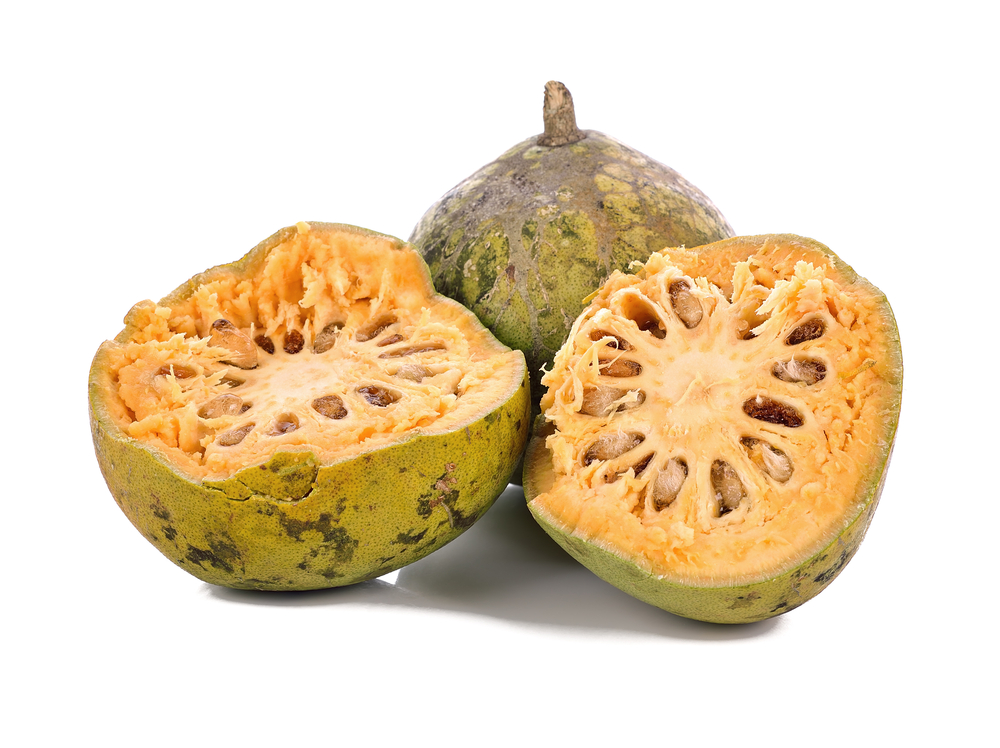 Bael or wood apple is a plant popular for its fruit. A powerhouse of health goodness bael stands out for its nutrient potency and its robust energizing property. It is antimicrobial, antidiabetic,   anti-inflammatory, analgesic, anti-cancer, and boasts of many other such powerful components. The medicinal properties of the fruit merited mention in some of the erstwhile medical treatises “Charaka Samhita”. The goodness of this wonder tree and fruit finds a special mention in Rig Veda too.

Botanically called Aegle Marmelos and several tongue-twisting names, the wood apple is referred to as Indian bael, Bilva Pazham in Tamil, Bilva, or Maredu Phalam in Telugu, and Bilva in Sanskrit. It is a mid-size deciduous tree (approx. 8 meters in height) that boasts slim branches and has brown bark that often oozes edible gum. The leaves of bael are quite distinctive looking as each leaf consists of around 4 to 12 pairs of side veins which join at the centre. It also flaunts greenish-white and sweet aromatic flowers.

The Bael fruits are orb-like in shape. The exterior is hard enough not to split even after ripening. While the raw fruit looks greenish-yellow in colour it takes on a complete yellow colour on ripening. The fruit has a sac with about 15 seeds. The sac is filled with natural adhesive. The pulp of the ripened fruit is a sweet-smelling luring aroma.

Bael tree requires fine sandy loam soil, sunny weather, and a warm humid climate which are suitable for cultivation; pH ranges from 5 to 8.

It is found growing at the foothills of UP, the Himalayas, Bihar, Chattisgarh, MP, Uttaranchal, Jharkhand, the East Coast, and the Deccan Plateau.

The best way to include bael fruit in your diet is to have it in sherbet. Break open the outer shell with a hard object and scoop off the pulp to make a delicious drink.  Such homemade drinks are popular in the households of Odisha and West Bengal as this sherbet is an energizer and instant coolant on hot days.

Bael is well-known for its nutritional and medicinal properties. For aeons, it has been utilized as a medicine in Ayurveda, Siddha, and other forms of alternative therapy.

Remedies are prepared from bael fruit to cure diarrhoea, dysentery, peptic ulcer, respiratory infections, and relieve constipation. It works as an antidote to snake venom and has wound-healing elements.

This botanical wonder fruit contains various nutrients like beta-carotene, riboflavin, and protein. It contains vitamin C, B1, B2, thiamine, niacin, calcium, and potassium. These fruits are known for their antioxidants as well as anti-inflammatory properties. It also has healthy amounts of good fats.

Most parts of the bael tree are used for its curative potency.

Bael, a fruit tree, has religious importance in Hindu scriptures. It is believed to be the favourite tree of Lord Maha Shiva and is also believed as the abode of Goddess Lakshmi for wealth and prosperity. Bilva fruits and leaves form a major part of Lord Shiva puja.

It is known from prehistoric times.

The leaves and oil from the seed have pesticide properties.

Half ripe bael fruit is good for the heart and brain.

It is used in the making of toffee, squash, candy, pulp powder, and nectar.